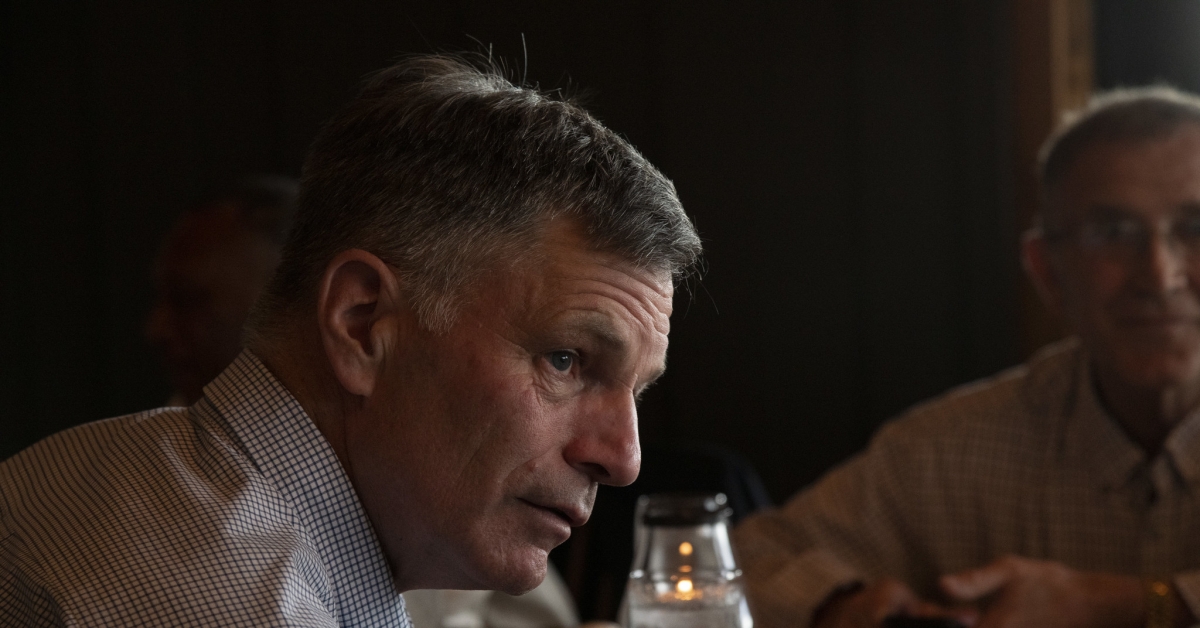 It took two years of infrastructure building but on Sept. 16 the Wyoming Division of Banking finally landed a prominent pioneer.

That’s when Kraken Financial became the first entity to receive a special purpose depository institution (SPDI) charter in the Cowboy State, giving the cryptocurrency industry insight into roughly how long it takes to become a bank. It’s also the first newly chartered (de novo) bank the state has approved since 2006.

While Kraken Financial still has some hoops to jump through before it has a certificate of authority to operate, Wyoming is running to keep its lead in the digital asset space. And it’s a priority shared by the state’s top elected official, Wyoming Gov. Mark Gordon.

The biggest challenge going forward for the state’s lead in the blockchain space will be seeing how the federal government responds to the regulatory scheme the state is creating, Gordon told CoinDesk.

Wyoming’s SPDI charter could still be affected by the U.S. Office of the Comptroller of the Currency’s (OCC) future decisions on national banks safeguarding crypto, and by other decisions Congress makes in response to large projects like Facebook’s Libra.

“We don’t want to wait until an MIT or a Facebook does something,” Gordon told CoinDesk in an interview. “We really have the opportunity here.”

“I’m really thankful that Kraken looked past Los Angeles and really understood that a small state, business-friendly, great tax environment, that was the place to bring new innovation,” Gordon said.

The state and prominent Washington, D.C.-based consulting firm Promontory Financial are leveraging current Federal Financial Institutions Examination Council manuals such as the Bank Secrecy Act. That includes guidance for bank examiners on how to question banks that handle digital assets.

“While we knew early on that we had supervisory manuals available from federal agencies and our in-house procedures, no one had really blended the two together,” said Wyoming Banking Commissioner Albert Forkner. “It could push a 500-page document.”

After the first round of exams, the manual will be revised to ensure consumer protections without stifling innovation, Forkner added.

Forkner said the Wyoming Division of Banking will work to ensure state law is not too dissimilar from what the federal government does in the future so that Wyoming doesn’t cause confusion for banks.

The level of exposure the SPDI charter is giving Wyoming is significant, Forkner said. The state has no foreign bank presence and not many branches from other state banks. Of the roughly 30 state-chartered banks in Wyoming, most of them are holding under $1 billion in assets.

“If you think about traditional banks, unless you’re a niche bank they all have similar activities,” Forkner said. “These companies have different markets and targets.”

Among traditional bankers, there’s not a lot of attention to the SPDI charter because it’s a special purpose institution, said Silvergate CEO Alan Lane. (Kraken has been a longtime customer of Silvergate.)

Read more: What It Takes to Get a Crypto-Friendly Bank Charter in Wyoming

“It doesn’t get a lot of headlines because there’s no FDIC insurance behind it,” Forkner said of SPDIs. “Everyone who is interested in digital assets recognizes Kraken’s name, and Kraken has various licenses around the world.”

Having more banking options in the space will mean crypto investors and firms won’t have to worry about being de-risked in the future, Lane said.

“Access to the Federal Reserve wire system is one of the differentiators for banks and one of the reasons that fintechs and cryptocurrency exchanges need banking partners,” Lane said. “Most players in this ecosystem, especially if you’ve been in it for a while, they want to have diversity, they want to have redundancy in their banking partnerships.”

SPDIs won’t compete on every level with Silvergate because of their inability to lend, Lane added. While the crypto industry will have fully reserved banks to turn to, Kraken and new entrants like Avanti won’t be able to offer products like SEN Leverage, a bitcoin-backed lending program that Silvergate just finished piloting.

As SPDIs wait for the Federal Reserve Bank in Kansas City to determine if it will provide the newly chartered banks with Fed master accounts, Silvergate is willing to work with the de novo banks on payments.

“A year or so ago we started a correspondent banking effort to work with other banks that are providing cryptocurrency-related banking services in other countries,” Lane said. “It’s certainly possible that we could help them get started.

Wyoming’s SPDI charter could play a role in new financial innovation in the state at a time when the state has been economically depressed.

Gordon said he believes digital assets could play a role in financing environmental sustainability efforts. For instance, blockchain could offer a better venue for trading carbon credits, which are tokens that give companies the right to emit a certain amount of carbon.

“One of the challenges we saw on the West Coast this year is that energy markets started to break down a little bit as people got very possessive,” Gordon said. “There’s opportunity for [blockchain] innovation in a renewable world where you can start to sell energy and get energy back.”

So, banking was changing … and then