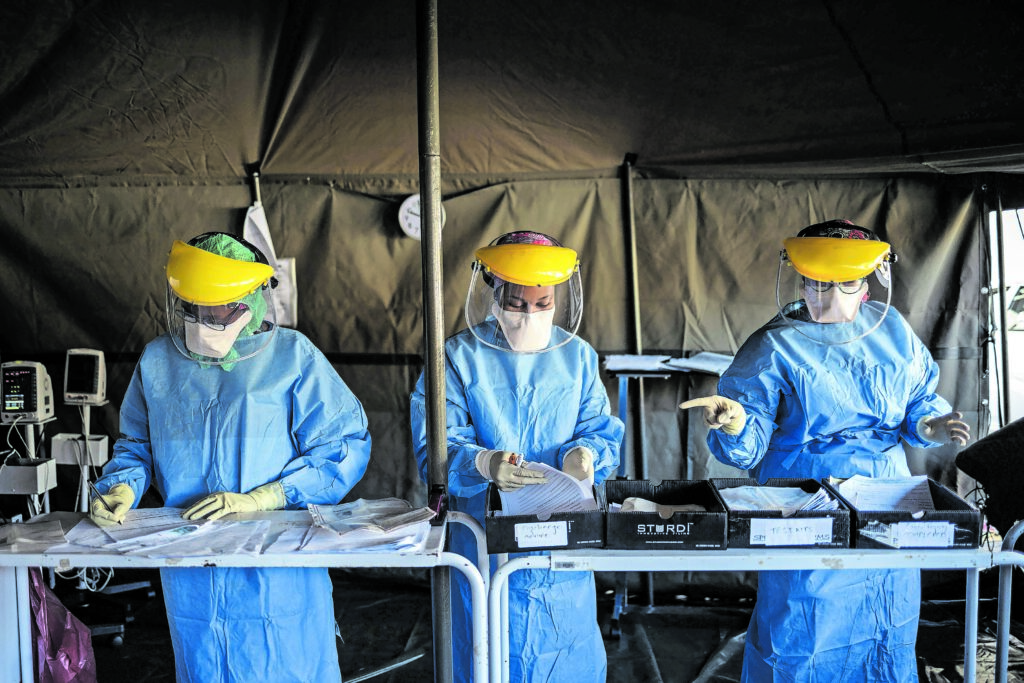 Bleak numbers of Covid-19 infections and deaths, with more than 4 600 South Africans having succumbed to the deadly virus this year alone, have forced the government to stay on adjusted level three.

On Monday, President Cyril Ramaphosa also announced an ambitious vaccine-procurement programme, which will see 40-million citizens, or about 67% of the population, being vaccinated by the end of the year for the country to achieve what the president referred to as “herd or population immunity”.

Ramaphosa slammed conspiracy theorists fuelling scepticism about vaccination, saying that the world had a history of immunisation against diseases, including mumps and yellow fever. “I was also vaccinated a few months ago against yellow fever,” Ramaphosa said with a smile.

Meanwhile, the president referred to the ghastly number of infections and deaths since the beginning of the year, saying that “the pandemic is now at its most devastating”.

“The number of infections, hospitalisations and deaths has become much higher than during the first wave. Since New Year’s Day, we have recorded almost 190 000 infections. More than 4 600 Covid-19 deaths have been recorded this year,” Ramaphosa said.

This, the president added, had resulted in a cumulative 1.2-million infections, more than 33 000 deaths and 140 000 hospitalisation since the outbreak of the pandemic in March last year.

“There are currently more than 15 000 people in hospital due to Covid-19. About a third are on oxygen,” Ramaphosa said.

He warned that Gauteng would experience a spike in cases when holidaymakers return from their festive-season break in the coming weeks. Ramaphosa listed KwaZulu-Natal, the Western Cape, Gauteng, Limpopo and Mpumalanga as the hotspot provinces in the country.

“New infections in KwaZulu-Natal and the Western Cape have spread fast, and have far exceeded the peak we experienced during the first wave,” he said.

The president said oxygen supply and field hospitals had to be increased, and personal protective equipment monitored to deal with the surge effectively.

The new Covid-19 variant, which the president said was known as 501v2 and was identified in South Africa in November, spread faster than the original variant and caused hospitals to fill up more quickly than expected.

“We must remember that this virus is carried through the air. We must avoid the three Cs: closed spaces, crowded spaces and close contact. We must not let up on any of the health protocols that we have been talking about since March last year,” Ramaphosa said, while calling for vigilance in following the guidelines.

“We must do everything possible to slow the rate of infections and, as we have done before, flatten the curve.”

Ramaphosa added that funerals had “consistently identified as so-called superspreader events”, and called on the public to attend funerals and visit grieving families only when it was necessary. “Funerals have become a death trap for our people. For now, it is safer to stay at home, unless it is necessary that you go there.”

Funerals may be attended by no more than 50 people, with gatherings related to sport, religious activities and political rallies still banned during adjusted level three. The curfew will be in place from 9pm to 5am, and it will remain compulsory to wear a mask in public, Ramaphosa said.

Despite an ongoing court action that has been launched by the country’s liquor traders, including South African Breweries, Ramaphosa asserted that alcohol sales will remain banned.

Images of congested border posts have flooded online and other media platforms, and the president announced that the country’s 20 land border posts, including the notorious Beitbridge border post between South Africa and Zimbabwe, will remain closed.

Leaving and entering the country would be done under strict regulations, with only cargo, fuel and medical supplies, among other goods, being allowed to enter and leave the country.

The full list of travel exemptions will be published this week, Ramaphosa said.

On vaccination, Ramaphosa said: “Vaccines offer to the people of the world a means to control the coronavirus pandemic. When enough people are vaccinated we will reach what is known as herd immunity.”

Herd or population immunity, according to the president, would be reached when 67% of the population is vaccinated. Ramaphosa said the vaccine rollout will be larger than South Africa’s HIV/Aids treatment rollout.

About 20-million doses would be administered in the first half of the year. This included giving the vaccine to 1.2-million health workers, who would be the first to be immunised.

The second part of the strategy would be to administer vaccines to the 16-million people in what Ramaphosa called “priority groups”, which include those in prisons and old-age homes. The remaining 22-million doses will be given to adults across the country.

“As we work to secure the supply of doses, we will do everything to ensure that the process is both transparent and information is made available to all South Africans,” the president said.