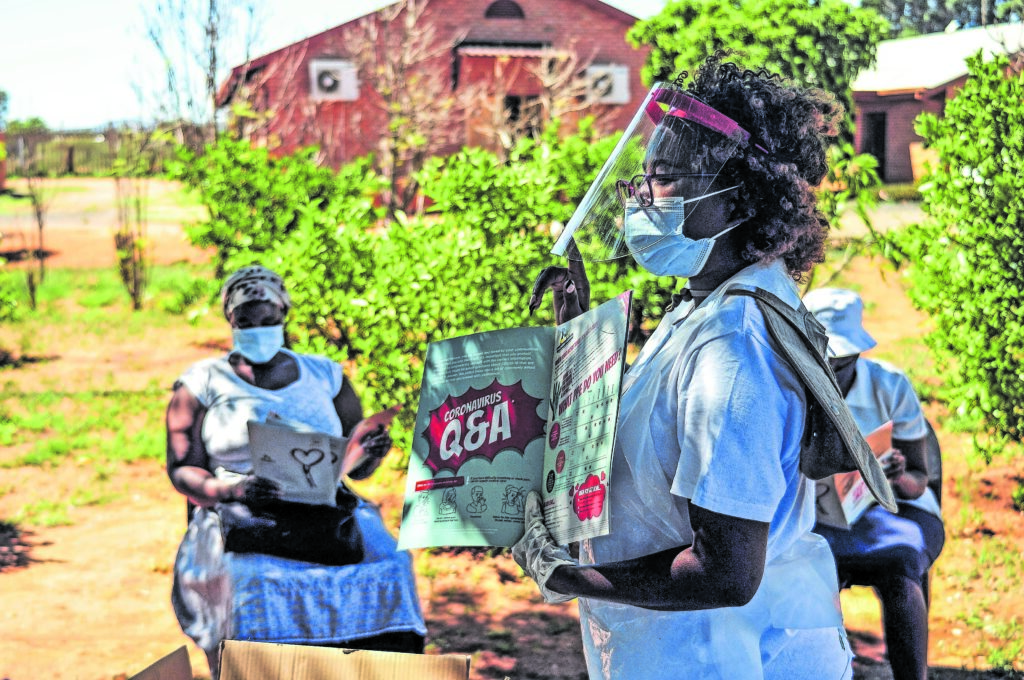 Her colleagues have been waiting for almost an hour when she finally arrives to join them under the corrugated iron carport at a business outlet in one of the villages in the Sekhukhune district municipality.

Her flat navy-blue plastic shoes are covered in a thick layer of dust. She slumps into one of the hard, black plastic chairs put there for the weekly meeting of the team of community healthcare workers.

She wipes the sweat on her forehead with a cloth. Her washed-out navy blue skirt and crumpled white shirt tell a tale of many days spent under the blistering Limpopo sun, just as her dusty feet speak of the long walk up and down the villages’ sandy streets.

To get to the establishment where she meets once a week with 13 other team members, she walked for more than an hour up a steep, narrow mountain path and then descended into one of the wide streets in the village.

This is nothing out of the ordinary, she and her colleagues agree. From Monday to Friday every week, they set off early in the morning to walk the streets of the villages and visit the homes of patients who can’t get to clinics to collect their medication, and also to ensure the sick are taking their chronic medication.

They also help pregnant women with antenatal and prenatal care, and liaise with social workers when patients require such services. In many cases, they find themselves having to prepare meals for the sick or bathe those who cannot do it for themselves.

In an area with high rates of teenage pregnancy, which they partly put down to the mines in the area and the high level of poverty, they also assist teenage mothers in coming to terms with the realities of parenthood.

In a nutshell, they are something of a walking clinic.

They are part of a team of 51 community healthcare workers who serve more than 20 villages in an area haunted by high unemployment and poverty.

Working in pairs, they visit an average of 15 households each day.

In the wake of the devastation caused by the Covid-19 pandemic, they have assumed an integral role in the war against the coronavirus.

But they face mounting difficulties, and fear victimisation by the authorities if they speak out.

One of the long-standing issues is that they are treated as volunteers rather than full-time employees of the health department. As a result, they are paid a monthly stipend. They buy their own uniforms, use their own money for transport should there be a need, and also buy their own stationery to record details of the patients and homes they visit on their rounds.

Since the pandemic broke out, they have had to make do with masks and personal protective equipment (PPE) bought with their own money.

“I have been volunteering for 25 years. Why can’t they absorb us into the healthcare system?” asks one of the healthcare workers, clutching a notebook in which she records her daily interactions with patients.

“Even our children are laughing at us. They say our work is only contributing to getting our shoes worn out. They say they would never do this, walking in the sun all day for nothing.”

He said there are standing Public Health and Social Development Bargaining Council Resolutions about standardising community healthworkers’ remuneration at R3 500 a month.

“These resolutions also highlight the need for processes to guide the employment, placement, remuneration, skills development and other processes related to conditions of employment for community healthworkers.”

Mkhize said the extension of the resolutions would allow the department to have discussions with all relevant stakeholders to guide the processes on conditions of employment for community healthworkers.

The health department had not responded to requests for comment by the time of publication.

As the war between unions and the government continues over their plight, the community healthcare workers continue with their daily toil.

Their weekly meetings also offer an opportunity to let off steam and counsel one another. They mention that nurses at the clinics they are attached to and social workers operating in their areas offer unwavering moral and emotional support.

Being at the coalface of providing primary healthcare exposes them to some of the most depressing scenes.

One of them recalls an incident that left her emotionally broken for weeks. A young woman, who had defaulted on her antiretroviral drugs treatment because she was stigmatised by her family, eventually died.

“I never gave up on her. I kept on going there, but she refused to take the medication until one day I got there and was told that she had passed away. I stayed until the mortuary people came to take the body in the afternoon. I was hurt, too much.”

Some of the workers’ encounters include visits to homes where people have nothing to eat, or where bedridden people, who also have no food, are left to fend for themselves.

“We help them. We clean up their homes, wash and prepare food, some we bring them pills. Most old people can’t go and collect their pills, [so] we bring them,” the woman says.

On a recent searingly hot weekday morning, another group of community health caregivers gathered under a morula tree at the back of a rural clinic in Sekhukhune for some good news.

Thobejane has been working with community healthworkers in the region for four years. They provide useful information to the NGO, especially in relation to gender-based violence and environmental issues.

“We engaged them since the beginning of the lockdown and the pandemic [and] we were concerned about their safety because they are the ones who were doing screening in the community and the most shocking thing is that they don’t have PPE, yet they still went to work,” Thobejane says.

The NGO received funding from the Greater Tubatse district municipality, which they channelled towards providing personal protective equipment to community healthworkers in the district.

“It was difficult,” says one of the healthworkers after receiving her box containing an apron, gloves, face shield, sanitiser and different types of masks.

“We were working in fear, worried we could transmit diseases or contract it from patients.”

Theirs is an occupation that demands not only love, patience and dedication, but guts and selflessness too. — Mukurukuru Media