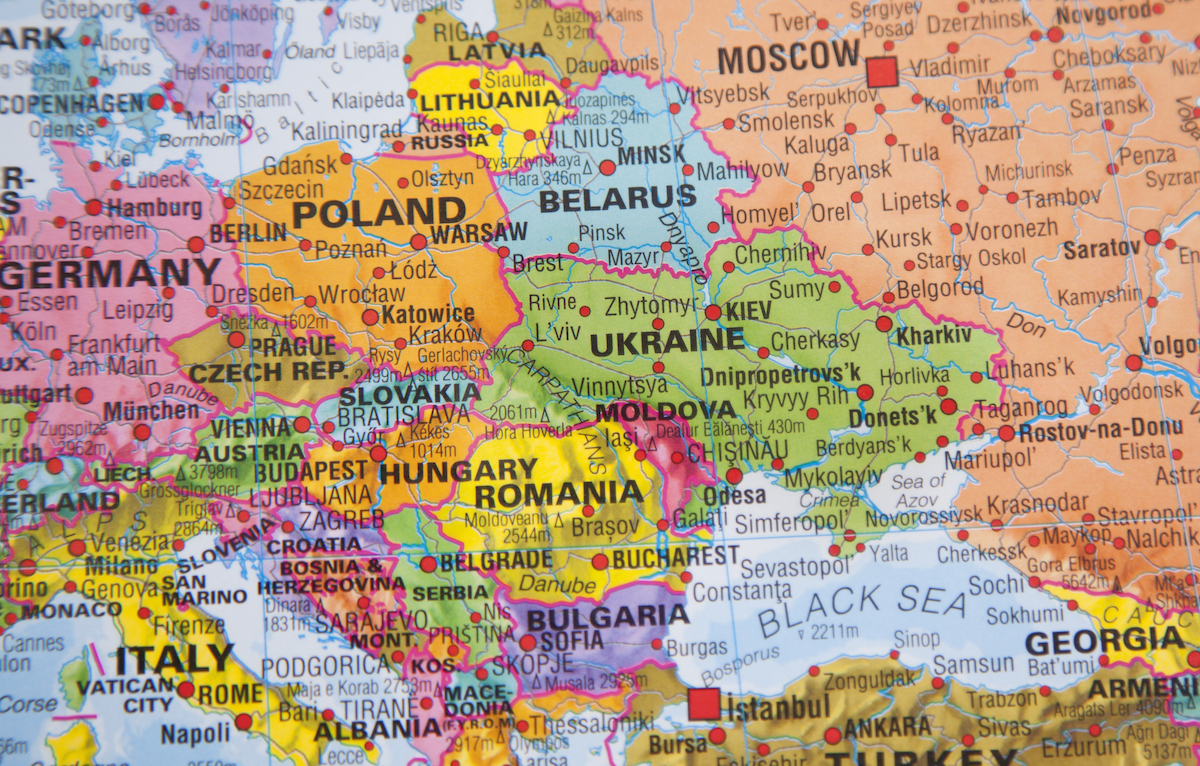 Developing countries are driving retail crypto adoption, and Ukraine is leading the way, according to a new report by blockchain analytics firm Chainalysis.

Ukraine, Russia and Venezuela are the top three countries for cryptocurrency adoption, Chainalysis said in its Global Cryptocurrency Adoption Index, published Tuesday as a part of the firm’s upcoming report on global trends in crypto usage.

The U.S. and China are still delivering the largest transaction volumes, but putting aside the largest “whale” crypto holders, Ukrainians, Russians and Venezuelans are the most active retail users of digital currencies, according to Chainalysis’ ranking. They are followed by China, Kenya and the U.S.

The list of “winners” might look surprising, but only at first glance, said Kim Grauer, head of research at Chainalysis. For example, Russia has a history of using e-payment services, Grauer explained. People are used to digital payments, so the transition to cryptocurrencies might be a bit more seamless.

Ukraine, for its part, has “a really tech-native population” she added, and both countries also have “a really industrious startup environment.” There is also more cybercrime activity in Eastern Europe than in other regions, which might add to the busy crypto market.

As CoinDesk previously reported, Ukraine is a hotbed for cryptocurrency adoption, with a tech-savvy population and crypto-curious government that is currently working on future regulations for the industry in cooperation with the local blockchain community.

The patterns for crypto usage varies from country to country. Ukraine and Russia are actively using crypto to send money for business-to-business and cross-border transactions, avoiding cumbersome banking regulations. In Venezuela, people use crypto more for savings and peer-to-peer trading.

“People in Venezuela don’t necessarily want to go to cryptocurrencies because it’s interesting or a cool thing to do, but because they are looking for a stable source of value,” Grauer said. She added that there is also an active remittance market between Venezuela and Argentina.

In Russia, Venezuela and Ukraine, crypto adoption is driven more by retail investors, while in China and the U.S., the crypto whales are the biggest drivers of growth, Grauer said.

“Looking at the share of the transfers greater than $100,000, we noticed that over the past year the share of the overall activity in North America that is professional has been growing,” she said.

Out of the three nations, Ukraine may be the most surprising leader because the country largely flies under the radar of the global crypto community. Located in Eastern Europe and with a population of 42 million, the nation has both an unstable economy and tech-savvy citizens, which apparently is a good recipe for crypto use.

Ukraine’s Ministry of Digital Transformation said there are several reasons for the popularity of crypto among Ukrainians: a big blockchain developer community and tech-savvy population in general, cumbersome regulations for export and import transactions and the absence of the stock market in the country. All of this is encouraging people to try out digital assets, the Ministry said in a blog post.

Read more: Why Ukraine Is Ripe for Cryptocurrency Adoption

Michael Chobanyan, founder of Ukraine’s first crypto exchange, Kuna, said small businesses, which are using crypto to circumnavigate foreign currency regulations, might be turning around up to $5 million worth of crypto every week, according to a loose estimate. They mostly pay for imports coming from Turkey and are using tether (USDT) in 90% of transactions, he added.

There are many retail crypto investors in Ukraine, too, Chobanyan believes. Kuna sees about $800,000 worth of retail crypto trades daily, he said. And this is just a fraction of overall retail volume, given the popularity of exchanges like Binance and EXMO, as well as numerous cash over the counter dealers in the country.

Retail investors are interested in crypto as there are not many other options for savings and passive income in Ukraine. The economy is small and there is no national stock market. Banks often fail and investing in real estate is too expensive for most people, Chobanyan said.

Crypto, on the other hand, has a low barrier to entry, easier compliance requirements and is safer than just holding onto cash.

Alex Bornyakov, the deputy minister for digital transformation of Ukraine, believes that individuals, not businesses, are the most active crypto users in the country.

“They are using cryptocurrencies for small investments and trading,” he explained.

This is an educated guess so far, he admits, as there is no official statistics for cryptocurrency usage in the country.

Crypto, like U.S. dollars, is a hedge against the volatility of the national currency, Ukrainian hryvnia, and against the general instability of Ukraine’s political and economic situation, said Ukrainian Bitcoin Core developer Hennadii Stepanov, going by Hebasto.

“Our situation is similar to that in Iran and Venezuela,” he said, adding: “Unlike gold, bitcoin is available for everyone.”

“Many of my friends know somebody who invested [in crypto]. I see huge interest, but the technology is still lagging behind. It’s hard to use it, and that scares people away,” Naumenko said.

According to Binance’s head for Russia and Ukraine, Gleb Kostarev, although Ukraine is not the biggest volume driver for Binance, it’s nonetheless one of the key markets for the exchange. The firm is constantly working on new fiat on-ramps for the Ukrainian hryvnia and is actively cooperating with the Ukrainian government on future crypto regulation, Kostarev added.

For both Ukraine and Russia, the COVID-19 pandemic became a driver for adoption, as the pandemic hit both economies hard, Kostarev said. Isolated at home, people turned to crypto as a new source of income.

“The macroeconomic situation in Ukraine remains complicated, and during the coronavirus pandemic it got even worse. The government is working on new ways to stimulate the economy, while the young population has to search for new sources of income. This is one of the key reasons for Ukraine’s interest for crypto,” Kostarev said.

Kyrylo Chykhradze, product director for the analysis platform Crystal Blockchain, said Ukraine’s registered crypto businesses have processed only $300 million in bitcoin since 2015, a fraction of the $150 billion that passed through U.S. bitcoin markets over the same period.

However, the low numbers can be partly explained by the fact that Ukraine-based and Ukraine-oriented crypto enterprises often chose other jurisdictions to register, so officially they are not in Ukraine.

“There is still a lack of legal grounding as of yet on the digital asset front, which has resulted in local crypto businesses targeting other locations (such as the U.K. or Estonia) to operate from,” Chykhradze said. He added that the efforts to put crypto businesses into the legal field by the government can change the situation in the future.

Quantifying crypto activity by country gets tricky, as individual bitcoin wallets aren’t marked with geographical locations. Chainalysis admits that geographic data is hard to get right if you only look at on-chain transactions, so the firm requested data directly from the global P2P trading platforms, namely LocalBitcoins and Paxful, and talked to experts on the ground, Grauer said.

To see activity in particular countries, Chainalysis mostly looked at web traffic on the crypto trading, merchant, gambling and other services using SimilarWeb, Grauer explained. If that data was not available, transaction data was analyzed using time zones, most popular fiat currency pairs, language options used and the location of the headquarters of the services.

Chainalysis also weights the numbers against each country’s purchasing power parity so that the poorer countries with more volatile currencies still can rank high if they are active in retail crypto trades (transactions worth less than $10,000). This means the highest-ranking countries are not necessarily the ones with the largest crypto volumes. Rather, they are the countries where people put a larger share of their assets into cryptocurrency.

“Countries have different populations and different GDP, so if you’re just doing index without weights it’s all skewed towards China and the U.S.” Grauer said.

A country’s position in the ranking is not defined by any single factor, Grauer said.

“Ukraine and Russia are not number one in any of the submetrics but they are in the top 19 by the [crypto] value received and the number of crypto deposits, and they perform well across the board,” she said.

Disclosure
The leader in blockchain news, CoinDesk is a media outlet that strives for the highest journalistic standards and abides by a strict set of editorial policies. CoinDesk is an independent operating subsidiary of Digital Currency Group, which invests in cryptocurrencies and blockchain startups.
0Shares
AdoptionChainalysisCryptoGlobalLeadsUkraine