bit2Big > Africa News > Trump slinks off world stage, leaving others to put out the fires he started 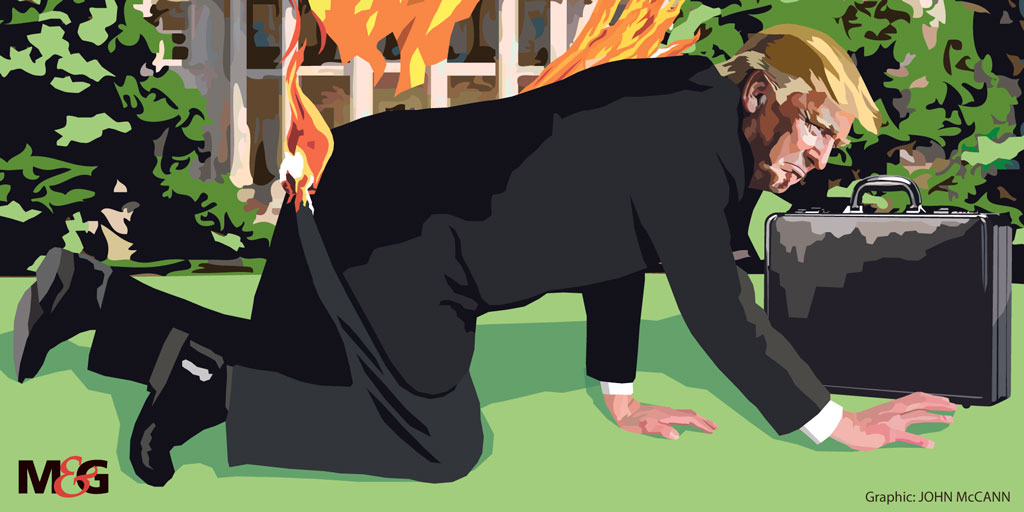 On the last Sunday of Donald Trump’s presidency, an armed group came to the grounds of the State House in Columbus, Ohio, to call for unity among the nation’s divided populace. It was a most American scene.

“We’re all liberty-minded individuals and we believe in everyone’s equal, individual rights,” the group’s leader, Henry Locke, told a small crowd — some in support of President Donald Trump, others in counterprotest. “And we’re just here to peacefully let it be known that we’re here for the people. We are not a pro-Trump group.”

And if their appearance — as an organised group, decked out with guns and tactical gear — was divisive to some?

“Well, they’re well within their rights to think that,” Locke told the Mail & Guardian as the group marched in formation to the legislature.

The protests in Ohio and elsewhere on the last weekend of Trump’s administration ended up being nonviolent nonevents. This came as a relief as the United States continues to reel from the attack on the Capitol in Washington DC on 6 January, in which a mob stormed the national legislature and forced lawmakers to flee to safe locations. Five people were killed in the attack.

The attackers —inspired by Trump himself — were attempting to halt the democratic transfer of power from Trump, who has repeatedly and groundlessly rejected the results of last year’s election, to Joe Biden. They failed.

On Wednesday, Biden was sworn in as the 46th president of the United States of America. The capital city was under military lockdown for the inauguration, with some 25 000 National Guard troops deployed and the ceremony closed to the public.

It remains to be seen whether the events of 6 January were a climax of Trump-affiliated political violence, or an escalation of previous slow-boiling, armed, anti-government unrest that feeds off extremist interpretations of America’s distinct brand of liberty. After all, just three months ago, the FBI arrested members of a militia group in Michigan who allegedly planned to storm the state capitol and kidnap the governor.

Among the plotters, extremist anti-government views seem to have converged with opposition to the governor’s Covid-19 policies.

The attack on the Capitol is particularly hard to assess as it was not carried out by one unified group, but rather an assembly of people and groups with various arms and goals,  a mob cloaked in a larger protest. But the threat — and increasingly, as details emerge, the planning behind it — was formidable: members of the mob ransacked the Capitol, killed a police officer, built a gallows, and chanted “Hang [Vice-President] Mike Pence.” Explosives were found nearby. By interrupting the certification of the Electoral College votes, they successfully held up the transition of power from one president to the next, even if they failed to prevent it. There are surely failed coup plotters sitting in jails around the world who accomplished less.

Adding to the confusion — and the unease of when, how or whether this could happen again — are strong freedom of speech and gun-rights laws that have made the presence of armed protesters a regular, often legal, appearance at demonstrations across the country, though some experts are now calling for existing anti-militia laws to be more thoroughly enforced.

But sometimes the groups themselves are loosely organised, further muddying the waters. At Sunday’s protests, while Locke and others said they weren’t with any specific group, some in their crew were sporting references to the Boogaloo Bois, a loosely organised, racist, far-right, anti-government group. Some in that movement organise armed but nonviolent protests for gun rights and against what they view as government overreach — like what happened Sunday. Others under the moniker, according to one American nongovernmental organisation (NGO), seek to unify “white supremacist and anti-government ideologies” and aim for armed insurrection, including the killing of police and federal officials.

While every American president has had to deal with constituents who didn’t like him, Biden is facing some Republican voters who don’t believe his election was legitimate at all. Barack Obama also faced conspiracy theories that he was actually born in Kenya, and therefore ineligible to be president.

Such fringe theories, like the 2020 election theories Biden faces, were given a bigger platform after being fanned by some establishment Republicans.

“I’m here because the election was stolen and unfair,” said Todd Emoff, one of the protesters in Columbus on Sunday. Both Emoff and another protester, Kathy Sherman, denounced the Capitol violence, and also floated ideas that there were leftist agitators in the mob. Sherman wouldn’t go so far as to say she believed the election was stolen, but expressed “grave concern” about emergency changes some states made to their election laws in light of the Covid-19 pandemic.

Though Sunday’s protests proved nonviolent, the International Crisis Group recently issued a warning about the confluence of misinformation, the view that the election was illegitimate, and the unknown numbers of Americans who are “armed and seemingly willing to resort to extreme measures to ensure their view prevails”.

“That is a nation where political violence will remain a threat,” the NGO said in a statement.

Part of the problem is that the theories about the election have mainstream, institutional support. As the Biden administration takes the reins, it will have to contend with not only the cohort of Republican members of Congress who voted against certifying his electoral win, but also the shared rhetoric between the attackers, Trump, and large swathes of the Republican party.

In December, Ali Alexander of the “Stop the Steal” movement, which promoted Trump’s claims of fraud, tweeted that he was “willing to give my life for this fight”. The Arizona Republican Party retweeted the post, adding, “He is. Are you?”

While Republicans have been quick to denounce the violence carried out in Washington, the uglier truth is that elected officials across the country, from Trump to mayors, promoted the same baseless theories that the attackers used as justification for their assault. At least one Republican state representative has been identified as a member of the mob, and others were outside the Capitol in protest.

“If you don’t fight like hell, you’re not going to have a country anymore,” Trump said at the 6 January rally held down the street from the Capitol, just before it fell to the mob.

His supporters were listening. What will they do now that he is out of office?