bit2Big > Africa News > The diplomats without an embassy 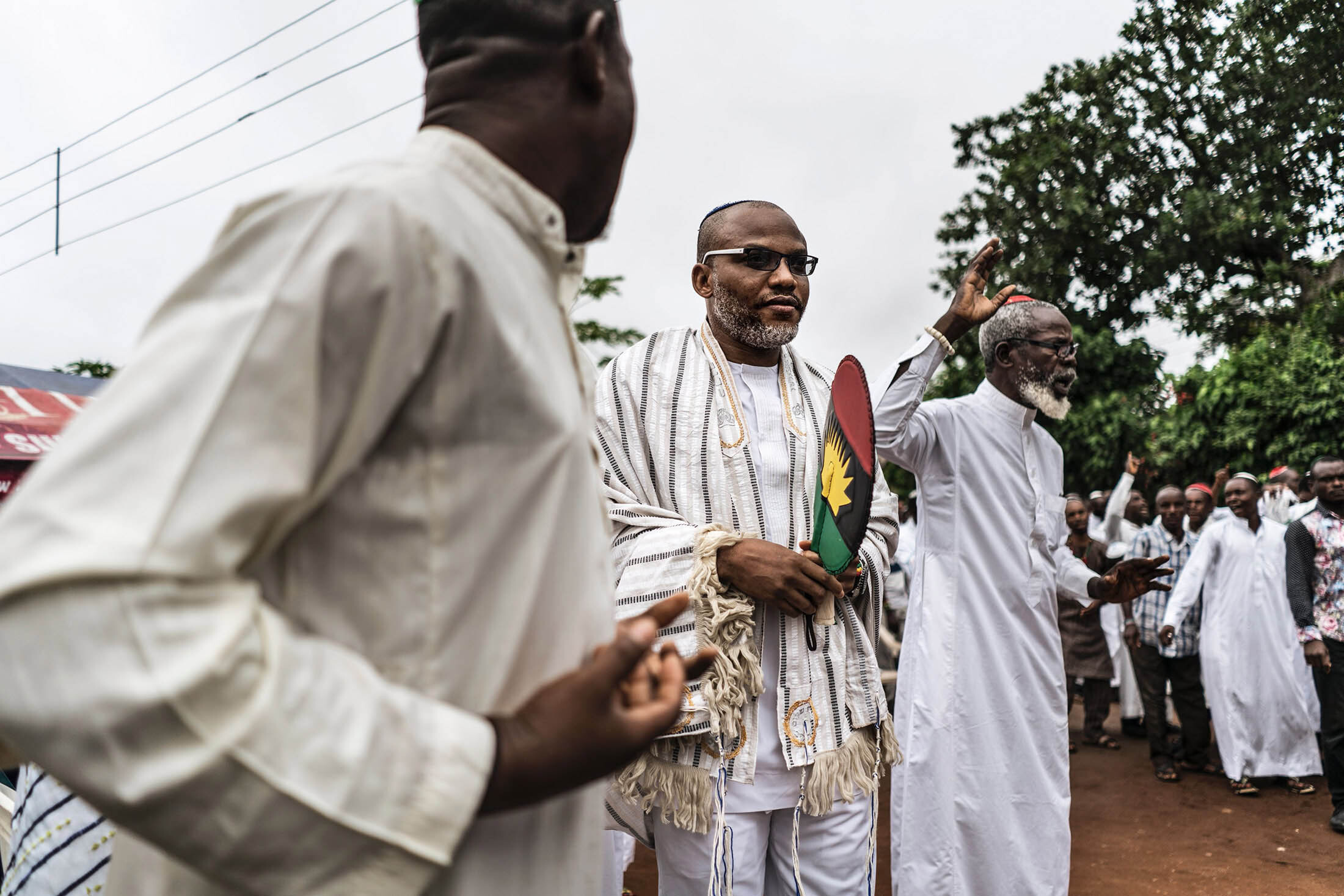 Officially, the dream of an independent Biafra ended in 1970, when the Nigerian Civil War came to an end after the breakaway state in southeastern Nigeria was defeated by the federal government. However, according to the United States government, Biafra still exists, at least in certain filings at the department of justice.

In the alphabetically ordered filings maintained under the Foreign Agent Registration Act (Fara), Biafra sits right in between Bermuda and Bolivia. But although Bermuda is recognised as a British Overseas Territory and Bolivia maintains an official embassy, Biafra is not officially recognised as an independent country in the United States, or anywhere. But all states — whether they’re widely recognised or not — as well as foreign political parties and other entities, must publicly file their contracts with US firms when those firms are hired to engage in work related to public policy or public opinion.

The Biafra filing contains a contract between a separatist group, the Indigenous People of Biafra (Ipob), and the US firm Mercury Public Affairs, although Ipob is not the only non-state, or quasi-state actor in the filings. Joining Ipob are the Coordination of Movements of the Azawad (CMA), an alliance of Tuareg rebels in Mali; and the Sahrawi Arab Democratic Republic, in Western Sahara. Both have hired Independent Diplomat, a nonprofit diplomatic advisory group. The challenges they face are serious and long-standing issues, ranging from independence to the implementation of peace accords.

The Biafra contract is signed by Nnamdi Kanu, the divisive independence activist and perennial thorn in the Nigerian government’s side. Kanu’s leadership of Ipob, including calling for arms at the World Igbo Congress in Los Angeles in 2015, has provoked heavy-handed responses from the government over the years, from alleged extrajudicial killings by state security forces to Kanu’s arrest for treason.

Kanu fled Nigeria in 2017, and his current location is unclear — a US  address is listed in the Fara filings, as is an Israeli phone number, although his Radio Biafra programme is based in London. The contract retains Mercury for “strategic consulting, government relations, lobbying, and media relations and management,” for $85 000 a month, according to the filing.

The situation on the ground in the ethnically Igbo southeastern Nigeria is nuanced, with real and perceived grievances against the federal government, and strongly differing opinions about secession, said Nnamdi Obasi, an Abuja-based senior adviser for the International Crisis Group. There have been several independence agitation movements since the return to democracy in 1999, but, in recent years, Ipob has emerged as the dominant group.

Kanu’s main goal with the US might not be a recognition of independence, however. When reached for comment, a representative for Kanu referred the Mail & Guardian to a June statement attributed to Kanu attached to Mercury’s Fara filing, which emphasised Kanu’s wish for a special envoy to address violence in Nigeria, stating: “We will not rest until the defenceless are protected and it is safe for Christians, Jews and other minorities to live peacefully side by side without fear of persecution.”

In addition to independence, Kanu has tweeted and posted retweets about the Nigerian government’s shortcomings against Boko Haram and herder-farmer violence, often framing the violence in Nigeria in controversial terms, such as a genocide against Christians — a framework many analysts don’t support.

Although the US might not be supporting an independent Biafra any time soon, Kanu has allies supporting his other views: In May, two US senators sent a letter to President Donald Trump, warning of “violence against Christians” and calling for a special envoy to Nigeria and the Lake Chad region. (Later in the letter the senators stated that the killings must be stopped, whether they’re happening “for religious purposes or any other purpose”.)

Under the Fara filings for Mali, the CMA is listed alongside — although separately — from the Malian government. The group, a coalition of rebels from the 2012 Tuareg uprising, differs from the various Biafran movements in that it actually holds governing and military power, rather than being an independence movement.

“They’re the most powerful armed group in the north,” said Alex Thurston, a political science professor at the University of Cincinnati, whose research focuses on the Sahel. Its role with the state is complicated — while governing its own territory, the CMA also backs candidates for the Malian parliament.

The CMA’s contract calls for Independent Diplomat to “seek the views of the US government by meeting officials and desk officers in the state department, including at the US Mission to the [United Nations], in order to assist the CMA in its diplomatic efforts.”

More broadly, Independent Diplomat, which also has offices in Geneva and Brussels, is also retained to “support the CMA to improve its diplomatic strategy and diplomatic engagement with the international community” regarding the 2015 peace accords. It’s a tall order: the CMA is not the only rebel group in Mali, where violence continues to this day; the central government is facing mass protests in Bamako; the CMA is itself internally divided and the peace accords are still far from fully implemented.

Independent Diplomat also serves the Sahrawi Arab Democratic Republic, the state proclaimed by the independence movement the Polisario Front, which does have some foreign embassies and international recognition (including from the African Union) for its claims to the former Spanish colony of Western Sahara.

A ceasefire was implemented in 1991 between Morocco and the Polisario Front, which both claim the territory and both have control of parts of it. Today the movement for Sahrawi independence is primarily a legal struggle. Hence, the consultants.

Reza Afshar, the executive director of Independent Diplomat, said the nonprofit represents groups and governments that don’t have fully fledged foreign services or diplomatic corps, to ensure relevant parties get a seat at the table when decisions are being made. In Western Sahara, much of its work concerns the Sahrawi government’s diplomatic interaction with the UN and the Security Council.

“Often international diplomacy revolves around states, and the state system,” he said. “But in order to actually reach sustainable outcomes in diplomacy, you do also need to talk to the often marginalised groups who may not have hitherto been formally part of the process.”

Limiting diplomatic channels to widely recognised states creates a risk for all involved in any given peace process, Afshar said, leaving non-states in the dark about what role they should be playing and leaving state actors potentially ignorant about local groups’ concerns.

Anna Theofilopoulou, who worked with the UN envoy to Western Sahara during her time at the UN in the 1990s and early 2000s, said calls for the referendum were outdated, but bringing about change diplomatically also posed problems.

“Because there is so much bad faith between the parties, it’s hard to see how you’re going to bring [about] these negotiations,” she said. “Unless you have some very inspired personal envoy to do it, and I just cannot see who the hell is going to be that at this stage.”

In some ways, the Fara filings show the chicken-and-egg problems that exist for non-recognised states: The problems they seek to solve are reinforced by their lack of recognition. But even without recognition, non-states find ways to keep turning the wheels of diplomacy and lobbying.

In 2018, Algeria hired a US lobbyist who had close ties to then-national security adviser John Bolton. Algeria has historically backed the Sahrawi government and Bolton worked with the UN diplomatic team that tried to organise the long-stalled referendum.

But even if non-recognised states struggle to win widespread recognition, they always have each other. To the chagrin of China and Somalia, Taiwan and Somaliland established diplomatic ties in July. The US, which officially recognises neither, but has historically supported Taiwan, chimed in with its support.

“Great to see #Taiwan stepping up its engagement in East Africa in a time of such tremendous need,” read a tweet from the US National Security Council after the announcement.