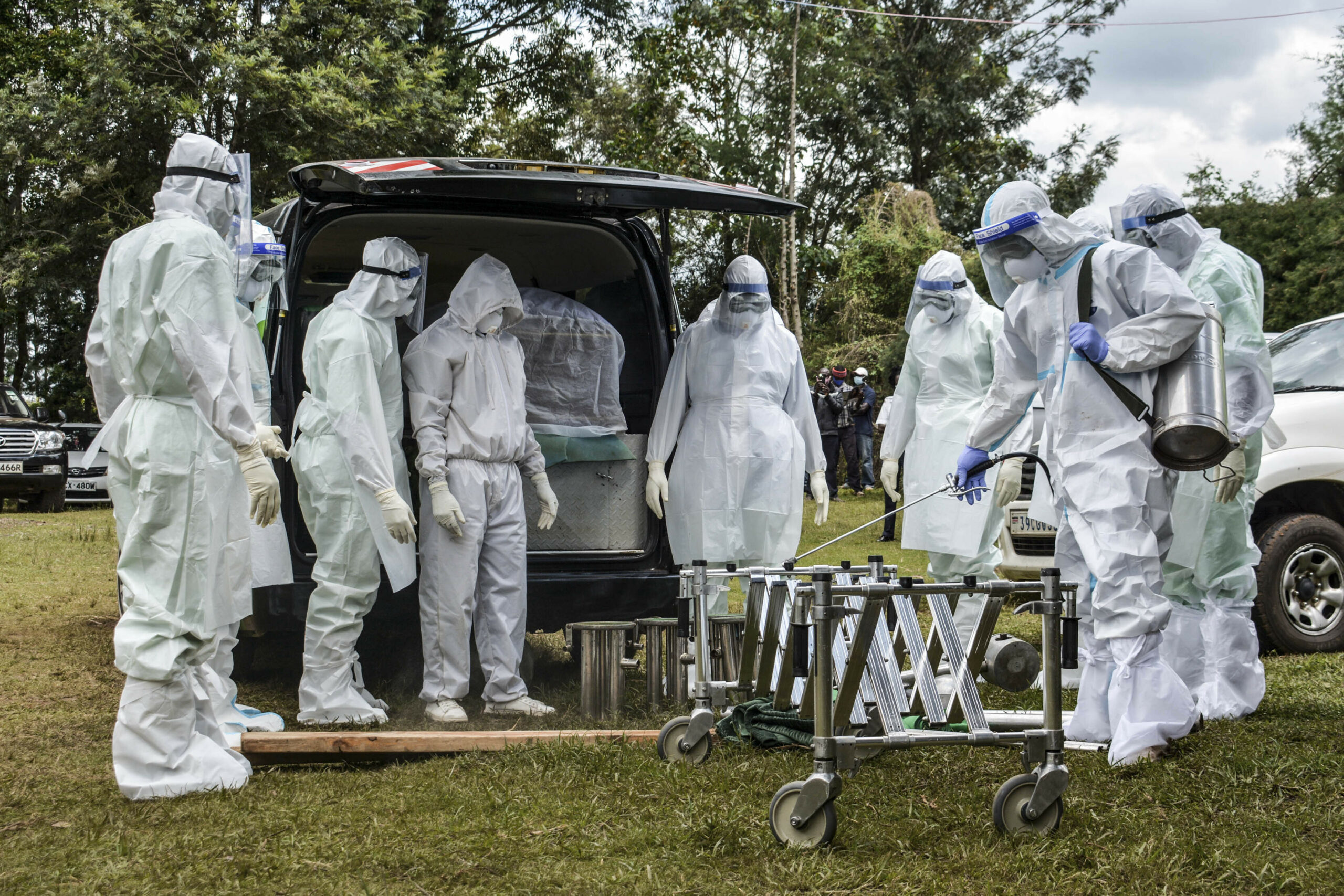 A resident of the slum, she was declared posthumously Covid-19 positive and her remains rushed from Nairobi in a state vehicle on August 10 into a waiting grave 400km away, in her Homa Bay County matrimonial home. Men covered in plastic under tight security hurriedly buried Nguka barely 48 hours after the results were released at Mama Lucy Kibaki hospital, where she succumbed to the virus.

Family members were ordered not to step out of their rural compound for 14 days by the local administration or risk forceful quarantine and related costs after the unceremonious disposal of the remains. Undergoing quarantine in Nairobi can be prohibitively expensive for Kenyans — especially those residing in the slums like Mathare — with patients being expected to pay an  average of 2 000 Kenyan shillings (about R300) a night.

“We are stigmatised because our mother is known to have died of the [Covid-19] virus,” a bereaved family member said.

“In times of death, mom’s shoulder was always present to lean on for many grieving members of this [Mathare] neighbourhood and our village in Homa Bay. That was not the case for us. Our neighbours and villagers have all turned against us,” the family member said. “They are afraid they will die by associating with us. We have been left alone.”

Social stigma towards Covid-19 in the slum communities in Kenya could well pose a greater threat than the lack of social distancing in the tightly knit living quarters of Mathare. Residents prefer to remain silent about Covid-19 infections.

Nguka worked in a risky environment, where most of the residents do not follow national guidelines for reducing the spread of the virus.

One of the nongovernmental organisations (NGOs) Nguka volunteered at  was Shining Hope for Communities (Shofco) in Mathare, an organisation entrusted with millions of dollars from global agencies, including the Kenya Covid-19 Fund. Among the agencies giving cash to Shofco is Give Direct, which pays monthly stipends of $30 to be disbursed only among individual vulnerable people who live in slums.

Nguka was among the 630 Shofco Urban Network (SUN) volunteers located in Mathare and Kibera slums. By the time Nguka succumbed to the Covid-19 infection on July 28, Shofco, through its network of SUN volunteers, had screened “over 1.8-million slum dwellers”, according to the NGO’s website.

Ironically, Nguka was not among the slum residents screened by Shofco, despite being a social community volunteer and losing her life to the job. It is not clear why she initially chose the available nursing homes in the slum before being moved to a hospital, where she died within five hours.

Nguka’s role among other volunteers was to mobilise residents in the slums to go for Covid-19 screenings and to receive quick attention by Shofco.

Approached for comment, the NGO’s media representative, Walter Mbita, refused to be interviewed and also rejected any knowledge that Nguka was one of the organisation’s volunteers. He was not aware of her death from Covid-19.

“No, they [his outpatients with Covid-19 symptoms] will not go to Shofco for screening,” said a doctor who works in one of the nursing homes in the slum.

“There is a stigma among the residents that Shofco is the centre of Covid-19 infections and going there will lead to certain detention or quarantine, followed by infection in quarantine, and ending up in death and burial in a mass grave.”

The slum “nursing homes” fit the description only in name, falling far short of requirements for such facilities. Basic medical examinations and laboratory facilities are unheard of in Mathare, except at Shofco. A source at the organisation said it faces reduced numbers of consultancies since Covid-19, a similar situation to that reported in many public hospitals.

The source says there are many unrecorded cases of Covid-19 in the slums because of a lack of mass testing. “The mass testing was only done in the neighbouring Eastleigh estate. Months later, the results have not reached those tested,” they said.

According to the World Health Organisation (WHO), Kenya has already passed the 35 000 mark of confirmed cases, with close to 600 deaths. The global total of infections is approaching 30-million, with almost 900 000 deaths. Health Minister Mutahi Kagwe reported only eight infections in Mathare in a July 6 statement from his office. The WHO has no records for Mathare.

“The numbers of deaths and infections in the slum is higher than what the minister says because of no mass testing,” the frontline doctor asserts.

According to the doctor, most infections in Mathare were contracted in the neighbouring Eastleigh estate, where the majority of workers perform domestic and construction duties. He says the infections in Eastleigh were, in turn, largely imported from Middle Eastern countries that struggle with higher Covid-19 infection rates. Many unskilled workers are recruited from Eastleigh to work in the Middle East, the doctor said.

The Middle Eastern countries in which Kenyans predominantly work are Saudi Arabia, Qatar and the United Arab Emirates among others, with Saudi Arabia recording more than 300 000 infections.

The doctor wears only a face mask as protection. To keep himself safe, he says, he is not responding to house calls in the slums, because that is where the majority of highly infectious cases are found.

“They only come for me when their loved ones are about to die. Those who know their condition will come and pretend with some remote symptoms not related to Covid-19 because they are afraid of being stigmatised.”

He introduces one of his patients, “Mzee” [a Kiswahili word meaning “elder”], who survived advanced stages of Covid-19, together with his three children and wife, after a successful home treatment, by strictly following the doctor’s advice.

“This thing will kill us all …” the 52-year-old father of three said weakly, as he looked forlornly at passing unmasked residents.

Mzee is a landlord with 10 tenants. “No, I was not tested,” he confesses.

He knew his family had suffered a pandemic attack after all five family members started developing symptoms similar to those seen on television. Four of his tenants and their families also seemed sickly.

“It started with a small headache from my young daughter,” Mzee recalled. He suspects his 10-year old daughter could have collected the infection from a tenant, because the child regularly cleaned up the communal washing area.

The other children and their mother also started complaining of similar symptoms, accompanied by fever, the same day. The diarrhoea started after the evening meal, followed by shortness of breath. Waking up the next day was difficult for everyone, Mzee said. Food tasted like steel, he recalls.

Looking at his frazzled family, the realisation hit him that this was not just a flu that would go away. His wife wanted the entire family to visit a health facility, preferably Shofco.

He rejected the idea, contrary to guidelines, and decided to quarantine the entire family in their tin structure. He admonished them against revealing themselves to nosy neighbours at the pain of being taken away to state quarantine.

He explained to them that their chances of survival in a health facility were going to be minimal and, should they survive, they would have to live with the stigma attached to victims with the possible loss of tenants or even their units being torched. Above all, they could not afford the daily costs associated with quarantine.

Mzee says he used a combination of herbal and pharmaceutical drugs, including high fruit consumption from the second day of the attack. He pretended to be stone drunk on his visits to purchase medicine and food to explain away his weak, staggering gait.

Nguka’s family feels fortunate that she had an insurance policy and that testing and state burial costs will be covered. “We just have to live with the stigma. People are literally running away from us since the news. To add salt to injury, we received no help from Shofco. We are physically and mentally weak. We need to stand strong and take life as normal,” says a bitter family member.

Covid-19 toll: (from top) The Bungoma County isolation team prepare to move the coffin of Dr Doreen Lugaliki, 39, one of the first Kenyan doctors to die from the coronavirus, during her funeral in July; Red Cross workers deliver disinfectants to Mathare residents; and Jane Nguka, who recently died from Covid-19. Her family says their neighbours have since shunned them. Photos: Brian Ongoro/AFP and Patrick Meinhardt/AFP