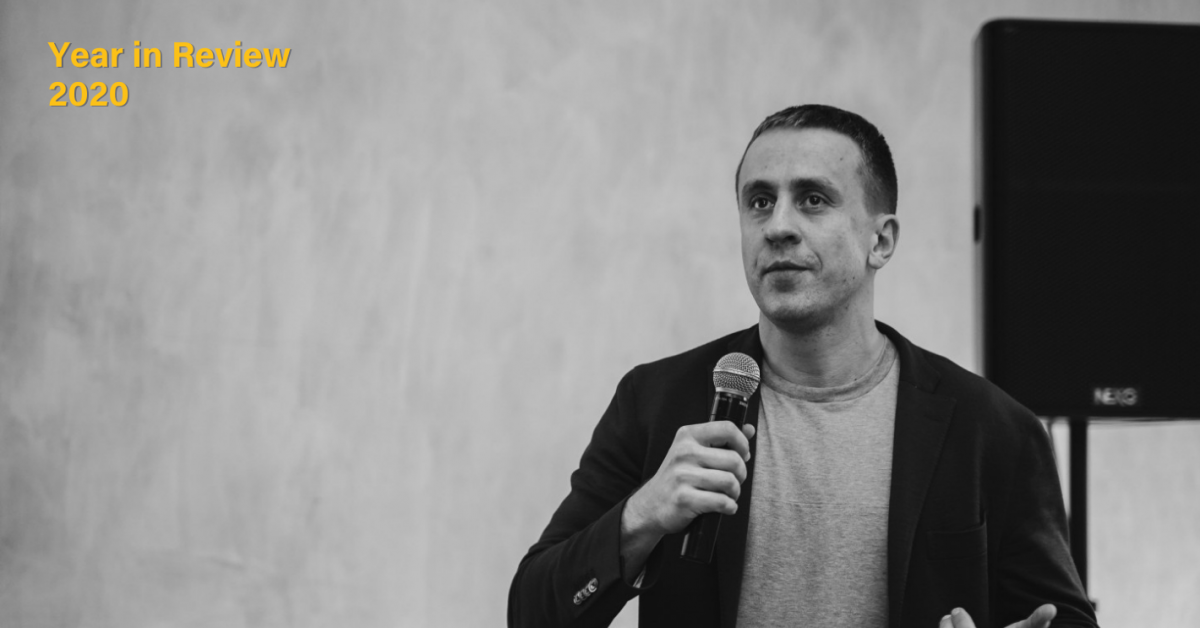 By late 2013, it was clear crypto assets would be the future of finance. It was the first time bitcoin crossed $1,000. To the cypherpunks’ chagrin, central banks around the world began publishing warnings to curb the “decentralized genie” threatening the stability of the familiar system. First they ignore you, then they fight.

Bitcoin’s rally stopped short due to a lack of trust and high volatility, rather than any state intervention. That was when people realized crypto assets needed a bridge to financial world, based on our own terms. This was the impetus to create “stable cryptocurrencies,” or stablecoins.

This post is part of CoinDesk’s 2020 Year in Review – a collection of op-eds, essays and interviews about the year in crypto and beyond. Sasha Ivanov is the founder of Waves, a blockchain platform.

From that moment, two different approaches to stabilize crypto asset prices began to develop simultaneously: fiat-backed stable assets and algorithmic stablecoins. While central banks perceived cryptocurrencies as a potential threat to the stability of the financial system and their monopoly in money issuance, it wasn’t until recently that they began to research, develop and experiment their own digital currency (CBDC) alternatives.

While the tension between stablecoins and CBDCs has not come to a head, it is still present to the perceptive. Just look at how China, the European Union and the U.S. responded to the libra (now diem) stablecoin project, for instance. These asset groups, fiat-pegged and algorithmic stablecoins, will eventually compete directly with CBDCs to try to squeeze each other out of the market.

The first and most common type of stablecoins are fiat-backed tokens on public blockchains, typically denominated in U.S. dollars. The most popular collateralized stablecoins are issued by cryptocurrency exchanges – Bitfinex’s USDT, Coinbase and Circle’s USDC, Binance’s BUSD and Gemini’s GUSD. Tether first appeared in 2014 and is the most popular “crypto dollar” today, with a market cap exceeding $18 billion.

Issuers of fiat-pegged stablecoins typically claim these crypto assets are backed with real dollars, other cryptocurrencies and government bonds, with reserves held in a bank account. This is what preserves a token’s “dollar parity.” Tether’s price, for instance, rarely deviates by more than a tenth of a percent.

But it is not easy to verify the real backing of such stablecoins. One has to trust reports of the issuer, that is a crypto company often registered in an offshore jurisdiction, or the occasional attestation by a third party. (The New York State Attorney General’s office is investigating the company Tether’s claims about its reserves.)

Users of fiat-backed stablecoins hardly think about their real backing, as the ease of use exceeds all doubts and risks. The stability of their price is maintained by trust, without using the market or technical methods.

The essence of “collateralized” stablecoins resides in a centralized issuer, an organization that bears economic and legal responsibility, and maintains fiat currency reserves in a bank account. In fact, these are not cryptocurrencies, but tokenized fiat – digital money on the blockchain.

Regulators have already managed to noticeably slow down the release of Libra.

Conceptually, they are similar to payment systems such as PayPal. On the technical side, their main difference is the transparency of transactions, as they pass through public blockchains.

USDT has occupied a big niche in the real economy, as it facilitates international transfers  and enables market traders to send money easily from Moscow to China and to many other countries. Instant transfers, low fees and the absence of know your customer/anti-money laundering (KYC/AML) requirements in some exchanges made classic stablecoins a very convenient tool.

Algorithmic stablecoins appeared even before their fiat-backed cousins. The first instances were launched on the Bitshares blockchain back in 2013. They were backed exclusively by the blockchain’s basic token, BTS, but were found to not be stable enough.

The most popular decentralized stablecoin, DAI, was launched in 2017, on the Ethereum blockchain. Its U.S. dollar parity is supported by market and technical mechanisms based on smart contracts that implement a price stabilization algorithm. Hence the term “algorithmic.”

An algorithmic stablecoin works on top of a public blockchain and is backed by a base cryptocurrency like ether (ETH). This crypto collateral  is locked into a smart contract and a new crypto asset is launched on its basis. Price stability is achieved by a CDP (Collateral Debt Position) mechanism with a collateral surplus of up to 50%, on average. When redeeming their tokens, users receive ETH back into their wallet.

Thus, with the help of price regulation algorithms, a stable crypto asset is created without the participation of fiat currencies and the necessity of connection to the traditional financial system. Algorithmic stablecoins work like cryptocurrencies. Unlike USDT and its analogues, they are decentralized and are not subject to a single issuer and regulators.

The crypto industry is now dominated by collateralized stablecoins. And while they are capable of maintaining a dollar peg, algorithmic stablecoins can be quite volatile during crises.

Algorithmic stablecoins are widely used in the DeFi industry, but they cannot yet go beyond it. They have yet to be used in real economic operations.

In late 2013 and early 2014, most central banks issued initial statements and warnings about crypto assets. But it wasn’t until Facebook pitched libra, that they really kick-started their own digital currency R&D.

As of this year, there are nearly 50 ongoing central bank digital currency (CBDC) pilots or research projects. A CBDC could be a natural progression of money, as central banks are already familiar with running cashless transactions, with the benefit of increased financial transparency.

The main advantage of private bank stablecoins is the large distribution, user base and strong reputation of traditional financial institutions.

Earlier this year, the European Union, Great Britain, Canada, Japan, Sweden and Switzerland, together with the Bank for International Settlements (BIS) and the Financial Stability Board (FSB), began work on a joint study and coordination of the issue of CBDCs. In 2021, experiments with CBDCs are expected to begin in the European Union.

In October, the Bank of Russia presented plans to create a digital ruble. And in China, a pilot project to test the digital yuan in the real economy is already underway. The U.S. Federal Reserve has been conducting research for several years, but dates for the issue of a digital dollar have not yet been determined.

With the release of CBDCs, central banks strive to create a controlled, secure and stable monetary system that will reduce incentives for the creation of cryptocurrencies and other private money. CBDCs will be supported by central banks in the same way as national currencies and will have the status of legal tender.

So far, two state cryptocurrencies have been issued. Venezuela was the first country to release a state digital currency, called the petro, in 2018. However, its turnover is not transparent and its collateralization and use in the real economy are seriously questionable. In late October, the central bank of the Bahamas released its “sand dollar” CBDC. It is regulated similarly to the Bahamian dollar and is accepted throughout the island state.

From the end user’s point of view, CBDCs and bank tokens are very similar to fiat-backed stablecoins. Therefore, these three asset groups will compete directly and try to squeeze each other out of the market.

The main advantage of private bank stablecoins is the large distribution, user base and strong reputation of traditional financial institutions. People will use them like other banking products, in the same applications. That’s why stablecoins issued by private companies, such as jpmcoin and libra, are causing serious concerns for regulators.

Given that, traditional crypto stablecoins may not be needed. They are likely to survive but will be under a lot of regulatory pressure and their volumes will drop significantly. Their functions will be taken over by banks and CBDCs.

CBDCs have the strongest positions thanks to the administrative resources behind them. Regulators have already managed to noticeably slow down the release of libra, and perhaps this token will not appear on the market until all legal issues are resolved. The state will aim to completely overtake the niche of “blockchain digital money” as it does not need any outside players in this area. This process is already underway in China at the level of a pilot project – millions of Chinese in several regions are using the digital yuan, and their number will only grow.

Wide spread of CBDCs and elimination of cash are very interesting prospects for governments. This is the real basis for a modern financial infrastructure of the state in the 21st century, where it has full control over all transactions, cash flows of individuals and of companies.

There is no need for physical audits because all the transactions are made visible by the technology behind them, making it impossible to hide anything. More central banks will sooner or later adopt this concept, with different levels of control and possible privacy for citizens.

The crypto community will respond to the strengthening of state control with new and improved decentralized stable crypto assets. It is in uncertain situations that algorithmic stablecoins, which do not depend on banks and regulators, can prove themselves.

There is a need for cryptocurrency stability mechanisms built into blockchain architectures, and for cryptocurrencies with an inherently stable price, rather than a superstructure built over already volatile instruments.

In the crypto industry, they will take over the functions now performed by USDT and other collateralized stablecoins. They will become true stable cryptocurrencies, rather than just digital money.

To create them, similar mechanisms  to traditional bond markets are possible, just like the dollar is supported by treasury bonds. To do this, a token must be issued on a blockchain with already built-in stability. Such mechanisms have not been developed yet.

See also: Marcelo Prates – Central Banks Had to Up Their Money Game This Year – And They Did