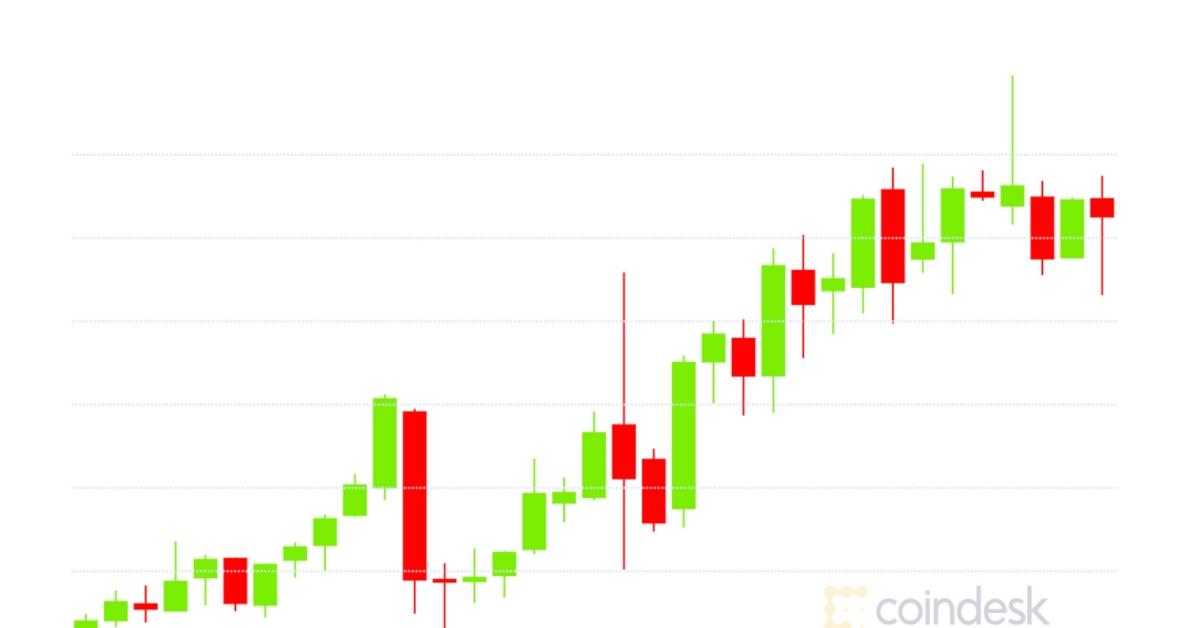 Bitcoin’s price passed $12,000 for the first time since September as Ethereum fees dipped.

Bitcoin’s price continued to make gains Tuesday following Monday’s steady price appreciation. The world’s oldest cryptocurrency breached $12,000 around 17:00 UTC (1 p.m. ET), going as high as $12,058 before settling in at $11,910 as of press time.

The last time bitcoin was over $12,000 was back on Sept. 1, according to Bitstamp spot pricing. (CryptoCompare, using index-weighted pricing, puts it at Aug. 19.) David Lifchitz, chief investment officer at ExoAlpha, says bitcoin could hit $12,500 at some point soon but will face a struggle. “The real resistance level is around $12,500-ish, so until a meaningful breakout above that level, nothing is done, $12,000 is just a psychological level.”

Lifchitz said that while the price level is notable, it could lead to bitcoin staying in a sideways pattern around this level similar to when it crossed $10,000. “Bitcoin, having held above $10,000 for more than two months in a row, was a bullish sign, even if it had been trading sideways in a $2,000 range.”

Nevertheless, the last time bitcoin traded below $10,000 on the spot market was back on Sept. 9. This piece of data appears to be bolstering some investors’ faith.

“We continue to break the record each day for the longest streak a bitcoin trades above $10,000, so overall investor confidence is growing I think,” said Michael Gord, chief executive officer of trading firm Global Digital Assets.

Read More: Crypto-Friendly Signature Bank Raked In $4B in Deposits in Q3 2020

Bill Noble, cryptocurrency strategist for analysis firm Token Metrics, said momentum is shifting from Ethereum-based decentralized finance, or DeFi, to bitcoin. “ETH and DeFi are watching BTC awaken like a sleeping giant,” he said. “The BTC move to $12,000 is sending the altcoin universe scrambling for cover.”

Bitcoin dominance, a metric that calculates the cryptocurrency’s share versus other assets on the market, has been trending up since the start of October. The last time dominance was at this level was at the end of August.

“Although there is positive sentiment around BTC, bull runs usually lead to a bear market in alt coins,” noted Melvis Langyintuo, a market strategist for the San Francisco-based cryptocurrency exchange OKCoin.

Market conditions may mean DeFi discounts could develop for traders, Token Metrics’ Noble noted. “A BTC move above $12,000 could result in a DeFi dip that could be bigger than most expect,” he said. “Any such move could be a golden opportunity to pick up the survivors of the DeFi shakeout at discounted prices.”

Ethereum fees get cheap – for now

On Saturday, Oct. 17, the daily average fee on the Ethereum network hit a three-month low, at 0.00246199 ETH. That’s a level not seen since July 12 when the average was 0.00211437 ETH. Fees, which are trending back up from Sunday’s low, are required on Ethereum to send transactions, including to smart-contract based DeFi platforms.

Jean-Marc Bonnefous, managing partner of Tellurian Capital, an investment firm that has followed cryptocurrencies since 2014, said deflation of DeFi hype is causing fees to go down. “Gas fees are lower as the recent enthusiasm for DeFi tokens, [decentralized exchanges] and [automated market makers] has hit a wall for now,” Bonnefous told CoinDesk.

If DeFi heats up again, expect higher fees, Bonnefous added. “We could be in for a few weeks of consolidation before another push higher for DeFi tokens, which will most likely see gas costs flaring again. The problem of high gas fees won’t go away without structural enhancements.”