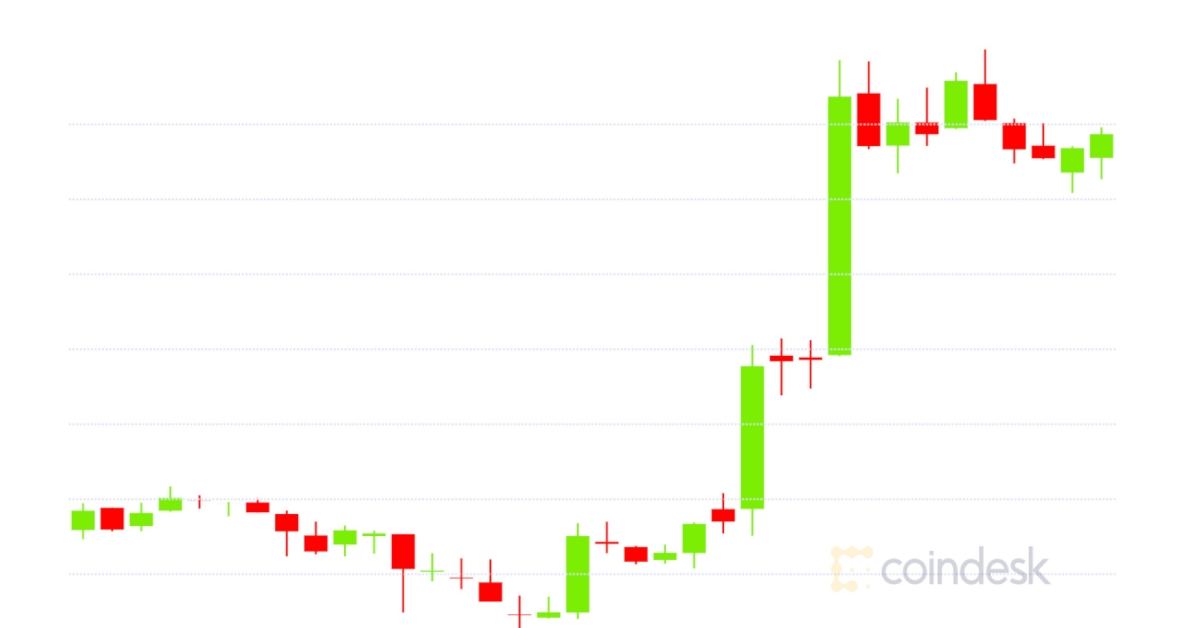 Bitcoin is flashing green as Square converts some of its cash to crypto while ether options traders are making lots of bets for December expiration.

Bitcoin’s price popped Thursday, led higher almost immediately following the announcement that payments firm Square had invested $50 million to purchase 4,709 BTC. The development pushed the price per 1 BTC to as high as $10,962 before settling to $10,890 as of press time.

“News that Jack Dorsey’s Square has purchased about $50 million worth of bitcoin is a definite positive that appears to have driven markets higher on the back of positive sentiment,” said Guy Hirsch, USA managing director of multi-asset brokerage eToro. “Dorsey has long been an advocate of the largest cryptocurrency, and this move reaffirms his bullish stance, and Square’s.” The stock price of Square (NYSE: SQ) also rose Thursday, in the green 1.8% at the close of trading today.

“Seeing traditional institutional firms such as Square invest into bitcoin to hold on their balance sheet after a publicly traded company such as MicroStrategy purchased $250 million worth of bitcoin as a ‘hedge against inflation’ brings significant credibility to bitcoin,” said Michael Gord, chief executive of trading firm Global Digital Assets. “The CEO of MicroStrategy even went so far as to call bitcoin superior to cash”.

If indeed these investments are a bet against fiat, the U.S. Dollar Index (DXY), a measure of the greenback versus a mix of other currencies, is one metric to watch. Though it has picked up since a late-August low, it’s still in the relative doldrums for 2020 and was flat, in the red 0.02% as of press time Thursday.

The positive market sentiment has certainly translated into higher-than-average bitcoin daily spot volume. Major exchanges already have $332 million in volume so far Thursday, higher than the $284 daily average in the past month.

While bitcoin volume is up Thursday, volatility remains low. In the options market, six-month at-the-money (ATM) volatility, the difference between option strikes to the price of bitcoin, is at 65%. The last time it was that low was back on July 31.

“The buy pressure from institutional investors is increasing, so we are seeing a nice ramp up,” said Marc Fleury, CEO of Two Prime, a crypto asset management firm. “We seem to be entering an era of a low-volatility bull market.”

Ether options traders are heavily betting on the asset’s price at the end of the year. Over 473,500 ETH in open interest is set for expiration on Dec. 25, which is approximately $166,023,00 worth of options at Thursday’s spot prices.

Vishal Shah, an options trader and founder of derivatives exchange Alpha 5, says traders started piling up ether options positions for December a while ago. “It really started gearing up with DeFi a few months back,” he said. There’s two main reasons for the options bets, Shah added. “It’s either a levered play on DeFi doing well, or as a tail hedge against impermanent losses,” he said. Impermanent loss is when an investor contributes to a liquidity pool and can temporarily be worse off than actually just holding the asset due to protocol imbalances.