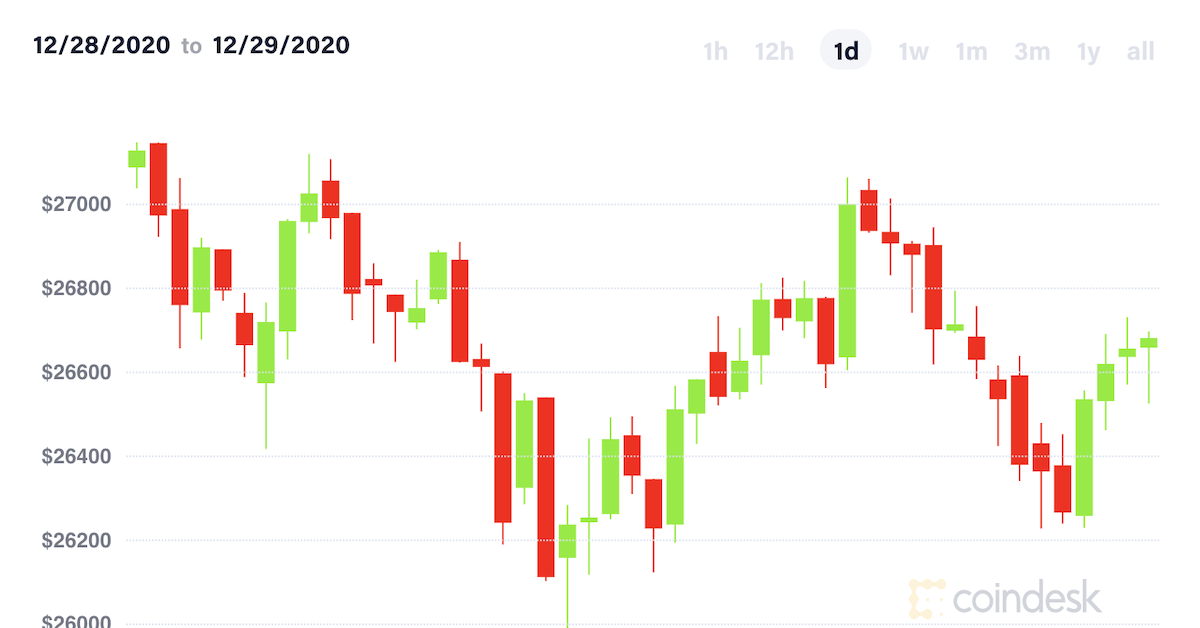 Few seem to be bothered by bitcoin’s volatility on Tuesday, as the No. 1 cryptocurrency by market capitalization declined to the $26,000 level after its first-ever trades above $28,000 on Sunday. Many market participants are convinced retail and institutional investors will push bitcoin’s price higher after the holiday lull.

With limited institutional trading activity during the final days of 2020, traders and analysts told CoinDesk the recent price movement has been largely driven by retail investors.

“It’s quite unusual for the past whole week being like this, given it’s a holiday season. Usually during the holiday season there’s a liquidity crunch,” Mable Jiang, principal at crypto hedge fund Multicoin Capital, told CoinDesk. “The heat was partially driven by the recent run-up of bitcoin, and the resurfacing retail interest in the market, at least in China.”

Jiang noticed a few patterns in recent trading activity among retail investors. Some are rolling alt-coins into bitcoin and ether. Others are looking for coins that may potentially outperform bitcoin on returns in the coming months.

In TradeBlock’s weekly market commentary on Dec. 28, the cryptocurrency analysis firm wrote that recent highs for bitcoin and ether were driven by outflows from XRP.

“The only two digital currencies the [Securities and Exchange Commission] has definitely stated are not securities are bitcoin” and ether, TradeBlock said. “As regulatory uncertainty increased in the alt-coin market after the SEC’s action [against Ripple Labs, claiming it was trading an illegal security, XRP], traders took the opportunity to pile into more regulatory-certain assets, bitcoin and ether, while maintaining exposure to crypto amidst its one of the strongest bull runs on record.”

Yet, even though bitcoin’s price fell below $26,000 in the past 24 hours many market participants appear to be optimistic about the coming weeks and months, especially after investment activity returns after the holidays.

“Should the expected wave of retail flows materialize, I would expect to see bitcoin charge past $30,000 as we enter the new year,” said Denis Vinokourov, head of research at the London-based prime Brokerage Bequant.

Last month’s price move towards the previous $20,000 resistance level makes a convincing case to support such optimism, according to Chris Thomas, head of digital assets at Swissquote Bank. While small sell-offs occurred three times during that rally (on Nov. 25, Dec. 1 and Dec. 5), prices quickly recovered as a strong demand for bitcoin outweighed the amount of bitcoin sold.

“Since then, the bears have been reluctant to sell too much more as the probability is that they’ll be able to sell at higher levels in a few weeks or months,” Thomas said. “I suspect we’ll see a $26,500-$27,500 range into the first few days of the New Year. Jan. 4 onwards we should see institutional positions coming back into the market.”

Read More: Grayscale Has $19B in Crypto Assets Under Management, Up From $16.4B Last Week

Similar to bitcoin, market sentiment for ether’s performance has also remained positive despite the price volatility.

“Currently, [ether’s] trading volume is more than 15% higher than average, further proof that ether is on the rise,” Guy Hirsch, eToro’s U.S. managing director, said. “We expect the second-biggest crypto asset to continue rallying into the new year, and possibly surpassing $800 sometime during the first half of the year.”

If they aren’t doing so already, institutional players could also soon start looking into ether, particularly after the Chicago Mercantile Exchange (CME) said it will launch a futures contract on ether in February 2021. That could bode well for ether’s performance relative to bitcoin, according to some analysts.

“The imminent introduction of ETH futures from the CME Group should spur additional adoption, especially among financial institutions looking to diversify digital asset holdings with another regulated product they are comfortable with,” Vinokourov said. “This, combined with [decentralized finance’s] continued surge, should help ETH to outperform BTC for the foreseeable future.”

Retail traders also appear more interested in ether, as the total value locked (TVL) in DeFi, as provided by analytics website DeFi Pulse, reached to $14.47 billion, as of Tuesday.

“From the market-making side [on DeFi], we see flows pretty evenly, with slightly more [stablecoins] to ether than the opposite, which I believe indicates that there are still plenty of retail investors trying to jump on the wagon,” said Peter Chan, a trader for Hong Kong-based crypto firm OneBit Quant who is focusing on DeFi trading.