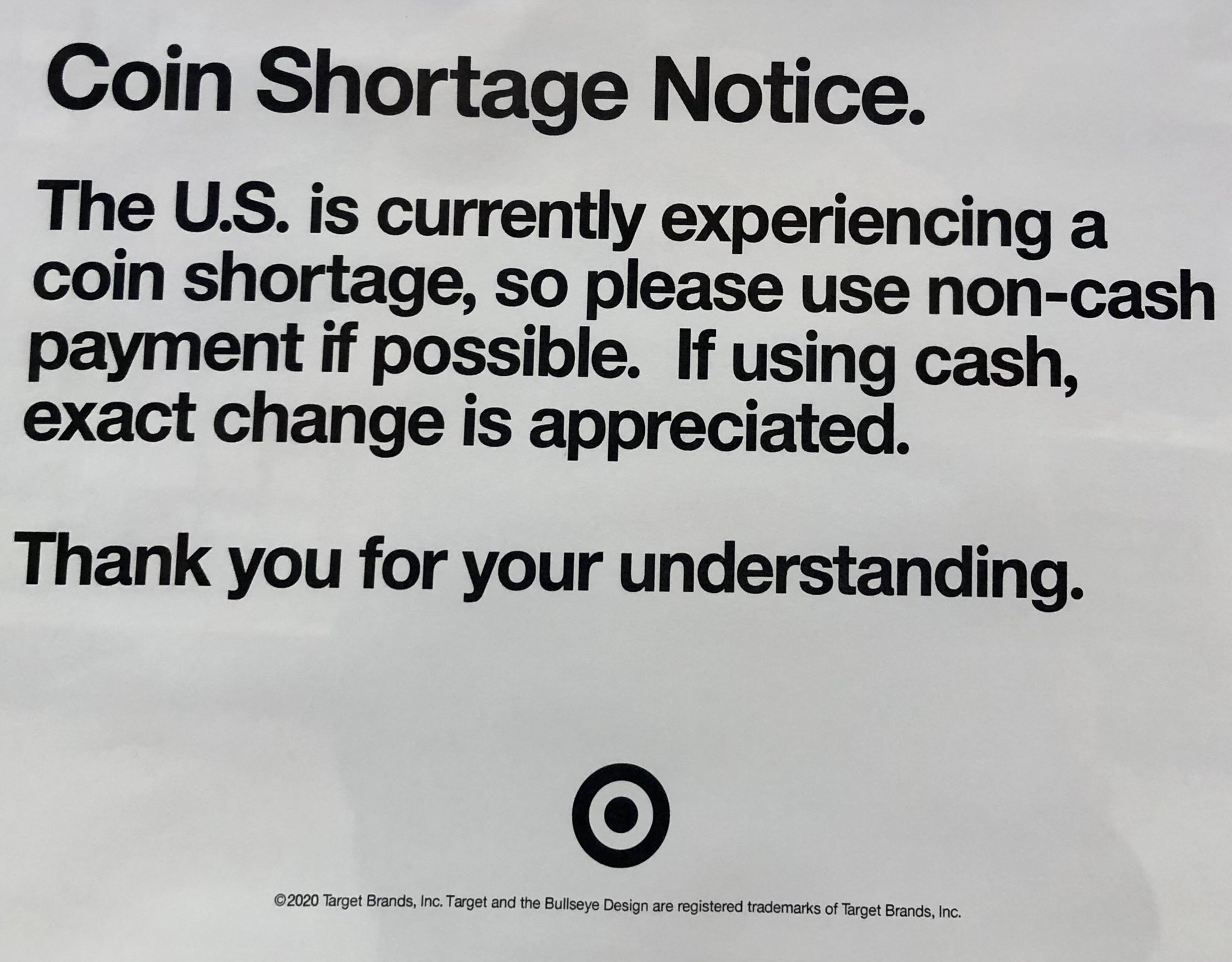 J.P. Koning, a CoinDesk columnist, worked as an equity researcher at a Canadian brokerage firm and was a financial writer at a large Canadian bank. He runs the popular Moneyness blog.

Cryptocurrency is still a new endeavor. People who use it aren’t too surprised when things go wrong. Ethereum Classic has suffered from three 51% attacks in one month. It costs $6 just to make a transaction on the Ethereum blockchain.

But all of these malfunctions pale in comparison to the breadth of the system error that has hit one of the oldest monetary projects in the U.S., the nation’s coin system. As we speak, the U.S. is experiencing a country-wide shortage of cents, nickels, dimes and quarters.

See also: JP Koning – What Bitcoin Can Learn From Gold About Staying ‘Clean’

Signs have sprung up in stores all across the U.S. asking shoppers to either pay with the correct amount of change or use a card. Grocery giant Kroger requests its customers to consider rounding up their bill and paying the proceeds to Zero Hunger Zero Waste, its non-profit charity, or to put the balance due on a gift card. The grocery chain blames the Federal Reserve, which is “currently experiencing a coin shortage.” Similar signs have sprung up at McDonald’s, Dairy Queen, Lowes, Walmart and more.

Businesses that are dependent on coins are especially hard-pressed. Residents of apartment buildings with coin-operated laundry machines, desperate for change, have been raiding local laundromats for quarters. Laundromat owners are begging non-customers to stay away, some going so far as to install security cameras and hire attendants 24/7.

CoinDesk readers can be excused for failing to notice the coin shortage. Cash usage has been steadily falling over the last decade. According to the Federal Reserve’s 2019 Diary of Consumer Payment Choice, about one in six Americans do not hold any cash at all.

But millions of Americans still use banknotes and coins to make daily payments. The Federal Reserve’s study on payment choice finds that 26% of all payments are still made with the stuff. Under-25s and the elderly tend to be the most intensive cash users. According to another Federal Reserve report, the 2019 Survey of Consumer Payment Choice, low-income Americans are the most cash-dependent demographic.

There can never be shortages of digital versions of the dollar because tokens flow rapidly over the internet, not slowly via hand.

It seems odd that an advanced nation such as the U.S. could be experiencing a shortage of change. Coin shortages were common in the medieval ages, especially shortages of low denomination copper coins, which weren’t profitable for mints to produce. “Moneyers preferred to strike high denominations to low ones… and were apt to leave the public desperately short of small change,” wrote historian Peter Spufford.

I’d argue that the U.S. coin shortage is not actually a shortage. The U.S. has all the coins it needs. The problem is that the coins are located in the wrong place.

According to the Federal Reserve, the U.S.’s central bank, there are around $47.8 billion worth of coins in circulation. (About the same market capitalization of Ethereum.) That’s $140 in coins per American. The U.S. Mint only produces around $750 million worth of coins each year, which is a tiny flow compared to the billions of dollars in coins already out there.

There is a life cycle to a coin. A retailer like Kroger orders five cent coins from its bank. It pays out a nickel as change to Jack. Jack keeps the nickel in a change jar for a week or a month, eventually bringing his stash to deposit in his bank account. Or he may drop it into a local Coinstar machine, Coinstar shipping his 5 cent piece to its bank. At which point Kroger can ask its bank for more change and get the nickel back.

According to the Georgia Bankers Association, about 82% of the banking system’s coin supply in any given month comes from recirculating coinage – folks like Jack. Only 18% of coin supply is freshly-made by the U.S. Mint.

The arrival of COVID-19 and ensuing shutdowns has caused a larger-than-normal share of the nation’s coins to be frozen up in people’s homes, cars, and pockets rather than making its way back into the distribution system. Why? I think this dislocation can be blamed on the combination of fear about catching the virus and the general slowness of counting out coins.

There is an asymmetry in the cash user experience. It is almost always faster to pay with paper money and get change than to count out and pay with the correct amount of notes and coins. We’ve all experienced this as we wait in the check out line for the person in front of us to dutifully count out her change.

But these days, speed is vital. Anyone who buys essentials with cash wants to minimize time spent in confined spaces for fear of catching the coronavirus. And so my guess is that when habitual cash-users went shopping during the first months of the pandemic, they no longer bothered to bring change with them. Far quicker to pay a $19.96 Kroger bill with a $20 (and get 4 cents back in change) than laboriously count out a $10, a $5, four $1 bills, three quarters, two dimes and a penny. So, Kroger and other retailers quickly found that their tills were losing coins at a far faster pace than they were being replenished.

This same fear factor would have inhibited cash-using customers from depositing their coin hoards at banks or in their local Coinstar machine, many of which are located inside grocery stores. Far safer to accumulate coins for an extra month or two than risk spending time indoors to deposit coins.

The government is doing its best to counteract this fear. The Federal Reserve has convened the U.S. Coin Task Force, a group that will try its best to reduce virus-related disruptions. Dave Ryder, director of the U.S. Mint, recently asked Americans to help get coins moving by taking coins to banks and coin kiosks. Likewise, U.S. Treasury Secretary Steve Mnuchin has taken to Twitter to beg Americans to mobilize their coins.

These are decent efforts. But at some point the U.S monetary authorities will have to explain why the U.S. is the only developed country to suffer from a coin shortage. Canada, the U.K., Europe, Japan, nor Australia have not experienced coin shortages.

My guess is that the U.S. government’s fumbling of its coronavirus response has led to prolonged anxiety on the part of American citizens relative to other countries. And so the U.S.’s coin supply has suffered from more dislocations than, say, Germany or Japan’s coin supply.

The physicality of the coin problem perplexes cryptocurrency fans. When Treasury Secretary Mnuchin tweeted out his impassioned call for coins to circulate, Chris Giancarlo, director of the Digital Dollar Project, responded that “A Digital Dollar would solve this problem.” Giancarlo is right. There can never be shortages of digital versions of the dollar because tokens flow rapidly over the internet, not slowly via hand.

But in the short-term a digital dollar is no fix to the current coin problem. Given that 26% of all payments in the U.S. still use physical cash, the only solution to the current coin shortage is to unfreeze immobilized coins. Without a mass migration of coins from homes to Coinstar machines and banks, Krogers and other retailers will continue having problems providing enough change to their customers.

I think that this will only happen as fear about contracting the coronavirus lets up, and people once again feel comfortable slowly counting out change in grocery aisles.

Disclosure
The leader in blockchain news, CoinDesk is a media outlet that strives for the highest journalistic standards and abides by a strict set of editorial policies. CoinDesk is an independent operating subsidiary of Digital Currency Group, which invests in cryptocurrencies and blockchain startups.
0Shares
CoinCryptoIsntKoningMoneyReadyShortage