bit2Big > Africa News > Is the crypto market finally back on track?

With many crypto investors jealously watching on as gold and equity investors’ assets keep climbing to greater levels, is it possible that cryptocurrencies have just hit the turning point that many have been waiting for?

The crypto market has shed over -50% in recent months, with many worried that a bear market was in full swing and an -80% loss in value was looming on the horizon.

People tend to think the worst, but then again, crypto always finds a way to surprise us, with this time being no different. Bitcoin is currently up over +30% from its lows, happening shortly after rumours of potential Amazon payment method adoption, as well as the recent B Word conference featuring Twitter’s Jack Dorsey and Tesla’s Elon Musk, which included praise for the crown cryptocurrency across the board.

When it rains, it pours

The FUD was coming from all directions, whether it be the China crackdown, mining hashrate halving, Tesla stopping Bitcoin payments, the energy usage of mining being too high or even the view that Grayscale premium had diminished, dramatically impacting investor demand — these last couple of months have been FUD central.

All this news hit the surface during a flood of bad press, yet all of it can be explained to actually represent a positive for long-term growth; you just need to know what’s actually going on behind the curtain and don’t take clickbait news at face value.

It’s no secret that Bitcoin mining in China accounts for over two-thirds of global Bitcoin production (66%). This led to concerns that Bitcoin mining was overly concentrated in one region of the world, which would expose the network to the risk of outages and political interference.

Positive outlook: This migration will start to decentralise the previously centralised Bitcoin hashrate. It’s probably one of the most significant steps Bitcoin has taken towards true decentralisation, and it will allow the fear of hashrate concentration to finally be put to bed.

Musk added fuel to the fire by saying Tesla would no longer accept Bitcoin payments due to the energy usage of Bitcoin being too high and dependent on coal and not clean energy.

Positive outlook: This comment has pushed a green movement in Bitcoin and crypto like never before, with most miners actively seeking ways to reduce their carbon footprint and increase the chances of a long and clean mining process for the future. This will inherently reinforce crypto’s longevity and induce more ESG investment in the future.

During this pullback, the Grayscale Bitcoin trust premium went negative, which many thought of as a bad sign, and assumed it showed that institutional demand was dropping at a rapid rate. But what if the opposite is true?

Positive outlook: More Bitcoin options, such as ETFs in Canada, mean that Grayscale is not the only option out there for investors to use to get exposure to Bitcoin. Therefore, while demand for their product may be coming off a bit, demand for Bitcoin investment options is increasing. Also, the fact that GBTC shares are becoming more liquid due to the decreasing lockup time from one year to six months means that premiums could be coming down due to more accurate pricing of the shares.

It’s not over: it never was

Let’s take a step back and look for the signs that the crypto market is back on track.

The Stock-to-flow model (S2F) was developed as a simple model to value scarce commodities like gold. The S2F ratio shows the current stock of a commodity (current total supply) against new production flow (amount mined that specific year).

For store of value (SoV) commodities like gold, platinum, and now Bitcoin, a high ratio indicates that they are mostly not consumed. Instead, the majority are stored as a monetary hedge, thus driving up the S2F ratio.

In the chart below, the Bitcoin price is overlaid atop the S2F ratio line. We can see that the Bitcoin price has continued to follow the S2F of Bitcoin over time. The theory, therefore, suggests that we can project where the price may go by observing the projected S2F line, which can be calculated as we know the approximate mining schedule of future Bitcoin mining.

The similarities with 2013 are prominent, with a mid-cycle pullback in July 2013 that went on to form a new all-time high in December that year. 2021 is looking startlingly similar, with both showing dips below the projected line around 1 000 days before the next halving.

It’s always a smart idea to look at long-term price data using a good old log graph for the simple reason that price changes are hard to display on a linear scale and can be misleading over an extended timeframe.

We can see the similarities between 2013 and today with a mid-cycle pullback that happened just before the major rally into the end of 2013. 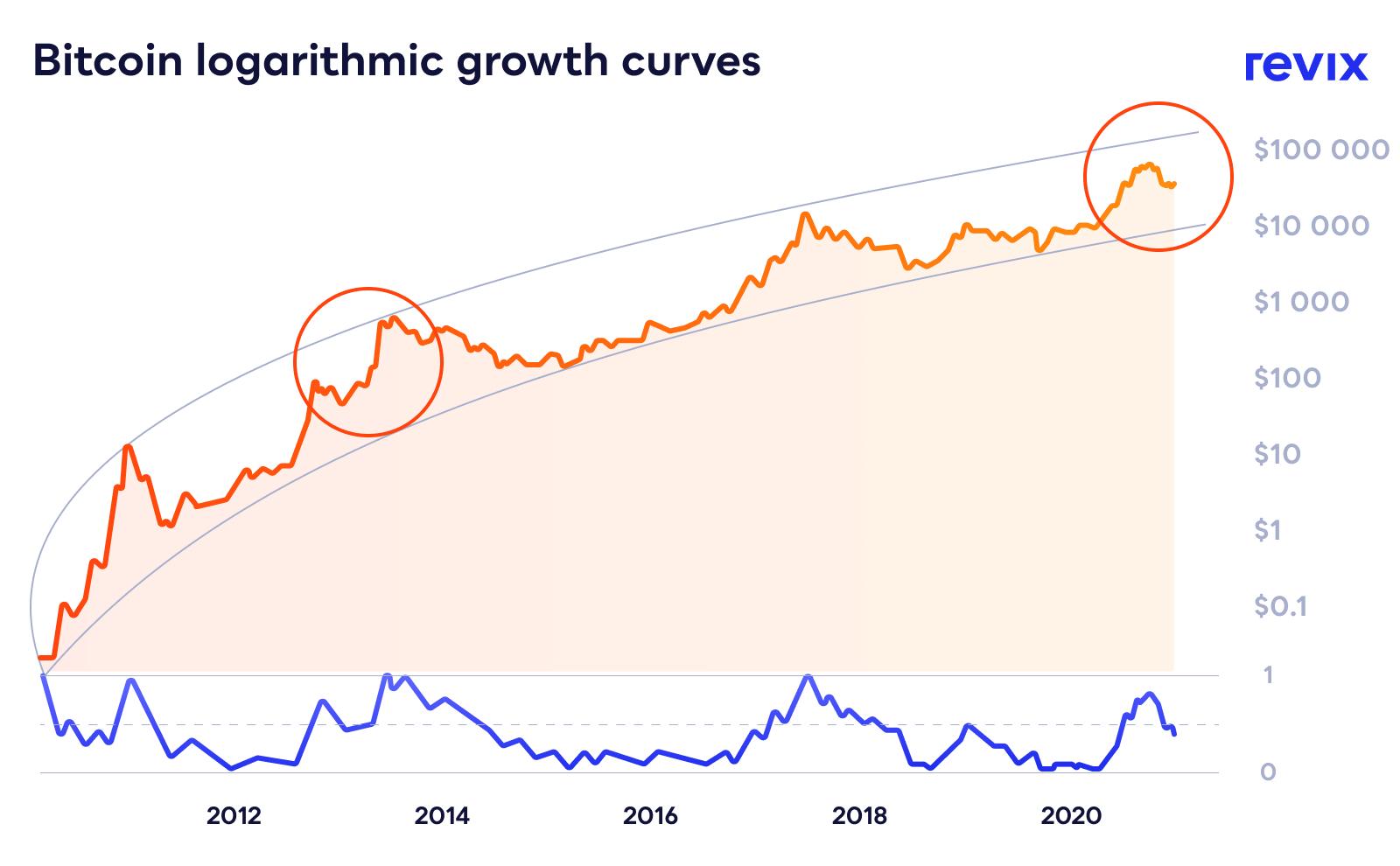 There are similarities that are startlingly close…

B Word – The future is bright

For all intended purposes, it is believed that this could be the turning point the crypto market needed. After months of bad news, some of the biggest, some of the most respected people in the world of business came together to speak about the state of cryptocurrencies and what the future holds.

The “B world” conference was the most hotly anticipated crypto debate to date, with three of the biggest names in the corporate crypto space sitting down to talk about the future of crypto. The conference didn’t disappoint, as Elon Musk, Jack Dorsey and Cathie Wood all expressed increased enthusiasm and hope for the asset class’s future. This finally put to bed any speculation over Elon Musk’s view on the asset class, as well as Tesla and SpaceX’s holdings and if they would sell — which he stated they won’t.

So if this is the same as the 2013 turning point, how do I gain exposure?

At investment platform Revix, you can gain access to their ready-made “crypto bundles”. These bundles allow you to own an equally-weighted basket of the world’s largest and, by default, most successful cryptocurrencies.

You don’t have to try to guess which up-and-coming cryptocurrencies will become the next Bitcoin since you’ll own a diversified basket of cryptos that gets automatically updated every month based on how the crypto market has performed.

Diversification works in every asset class in the world. It should come as no surprise that it works in crypto as well.

“My Bullshit Meter Was Redlining”

Cryptocurrency: A Guide to using it at online casinos in South Africa