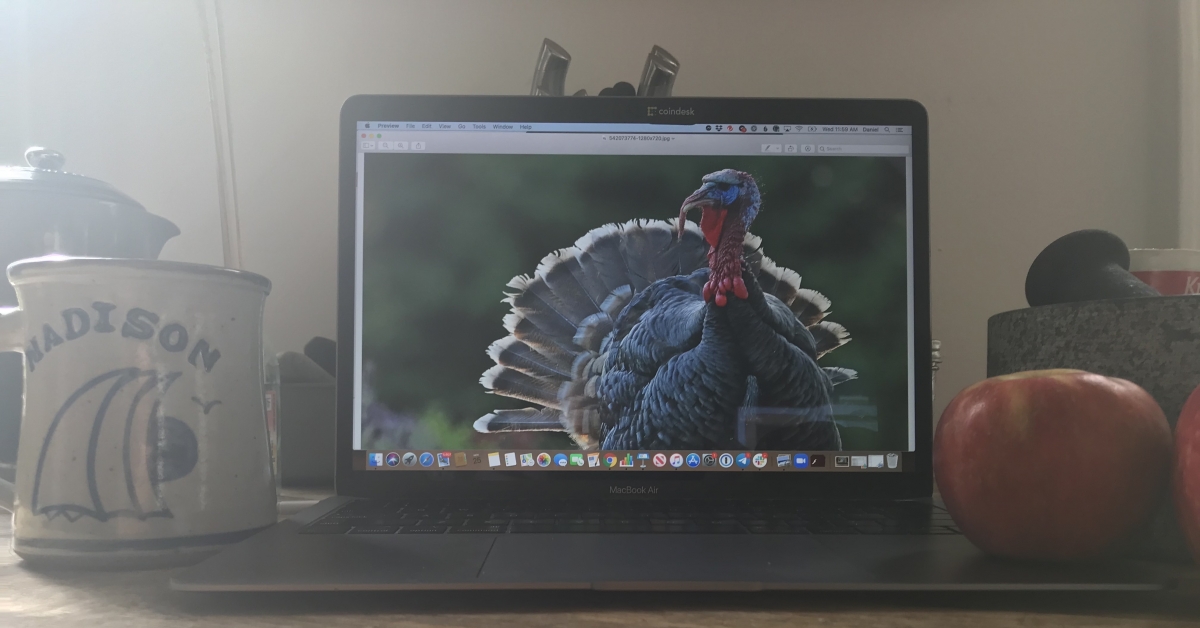 Could bitcoin replace turkey as the object of everyone’s attention this Thanksgiving?

It happened three years ago. The last time bitcoin went gangbusters, conversations in dining rooms across America were less about giving thanks than the fear of missing out.

“Should I buy bitcoin?” your uncle may have asked. “And what’s this about icy ohs? (Can you pass the turnips, puh-lease.)”

It’s evident things are different this time around – and not only because many will be clinking glasses over Zoom rather than their parents’ fancy china. Despite positively effervescent markets right now, it seems like the retail crowd isn’t buying. Or if they are, they’re being awful quiet about it.

But that doesn’t mean Mom and Pop aren’t interested in your fixation with cryptocurrency. Bitcoin has made headlines in mainstream media for breaking a new market cap. Also, due to the relentless work of such Ethereum chroniclers as Cami Russo and Matt Leising, more people are familiar with terms like “the world computer.”

Presuming your wallet is in profit, the folks may even want to hear more about this “Mr. Nakamoto” you’ve been working for. And just what is causing the value of this bitcoin to increase?

See also: What Is Ethereum?

“Paul Tudor Jones and Michael Saylor caused the value to increase,” Matthew Graham, an actual investor and chief executive at Sino Global Capital, said. “We control speculative buying through judicious use of such tools as FOMO and FUD.”

Meltem Demirors, the chief strategy officer of CoinShares, is crypto’s own caffeine-addicted, fun-loving bomb-thrower. Your parents may recognize her as a key figure in getting the colloquial (and scatological) synonym for small-capped cryptos added to the Congressional Record.

Ouriel Ohayon, chief executive of ZenGo, a non-custodial wallet startup that produces research reports known to grind gears among bitcoin maximalists, started his career as a tech journalist, attempting to explain the French startup scene to the world.

Kathleen Breitman is one of the co-founders of the community-governed, smart-contract-friendly blockchain Tezos.

Matthew Graham is CEO of Sino Global Capital, a decentralized tech investment firm based in China. He will eat your hot pot.

Ahead of this autumnal feast, we convened a panel of industry experts to answer the vital questions you might expect from family and friends who haven’t thought about bitcoin since they opened a Coinbase account in December 2017.

Is Satoshi Nakamoto the Bitcoin CEO?

Demirors: No leaders. No rulers. No CEO.

Ohayon: To be the CEO, there needs to be a company. And Bitcoin is not a company, it’s a protocol. That’s point number one. Point number two is that it does not matter, at least, anymore. Ten years in, Bitcoin is widely decentralized enough to exist without a CEO … even if it is a company.

Breitman: Is Moses the CEO of Judaism?

Isn’t bitcoin illegal? If it isn’t, it should be.

Demirors: No. Software and math are not illegal, although governments are trying to change that … [F]unny story: Cryptography – the reason why you can securely use the internet – was briefly banned and considered a weapon. Did not last long for, ahem, obvious reasons.

Ohayon: Like everything in life, bitcoin can be used for legal or illegal purposes. A knife could be used to cut a tomato, but also to kill someone. Because every transaction on the Bitcoin network is public, it is a very bad idea to use BTC for illegal purposes. So actually, bitcoin is the best anti-illegal currency on the planet.

Breitman: That would really increase its street cred.

Why would I need a world computer if my desktop works just fine?

Demirors: You won’t even know you’re using it. Do you really even know how your computer works?

If people can go around spending satoshis, why can’t I go around passing Monopoly money?

Demirors: You can, BUT, it will only work if people are willing to exchange goods and services for Monopoly money. Money is just collective fiction, even the dollar.

Ohayon: It’s the difference between paper and math. With satoshis is that you can’t print as much as you want. No one is keeping count of the amount of Monopoly paper in circulation or where they end up. Satoshis are just the opposite, mathematically proven scarce, and therefore attributable and spendable.

Breitman: I would encourage you to try that and see how far you get.

Graham: Why would you want to buy something with bitcoin?

Why are there so many coins? Dimes, pennies, nickels, quarters and the old half-pence will do.

I always keep my wallet in my front left pocket. Aren’t you asking for trouble uploading it to the internet?

Demirors: Why have a physical wallet in the first place?

Ohayon: Money has been electronic for many years now. Banks, PayPal, credit cards and many other monetary intermediaries have gone digital. But now, with blockchain, money can not only be electronic, but digitally native. The advantage is that you have a more secure protocol and proof of ownership, so you know that your money is your money.

Breitman: I bet you can fit two Ledgers in your front pocket!

Graham: You can try a safe deposit box but actually it’s a hard wallet.

I lost all my savings betting on bitcoin in 2017! My family didn’t eat for months. Now you want me to try again?

Demirors: Bitcoin isn’t betting. Please don’t bet on bitcoin. Be reasonable. Ish. (This is NOT financial advice, I’m required to say that.)

Ohayon: 2017 was definitely not a great time to speculate on bitcoin, if that was your intention. When investing, I would not bet more than you can afford to lose.

If I buy bitcoin, am I not just funding terrorists?

Demirors: No. The paper dollars in your wallet fund terrorism. The banks you hold your money with fund terrorism. Your own government funds terrorism with your tax dollars. When you own bitcoin in a non-custodial wallet, only you can spend that bitcoin.

Ohayon: Bitcoin does not belong to anyone, so you’re not funding anyone. You are usually buying it from services like exchanges and wallets that are usually regulated companies.

Breitman: No, sending money to terrorists is funding terrorists.

Graham: I asked Tether but on the advice of legal counsel they have chosen not to answer.

How do you own part of a bitcoin?

Graham: The same way you can own part of a dollar. Only it’s a religion.

See also: Still Don’t Get Bitcoin? Here’s an Explanation Even a 5-Year-Old Will Understand