bit2Big > Bitcoin News > First Mover: How a DeFi Trader Made an 89% Profit in Minutes Slinging Stablecoins 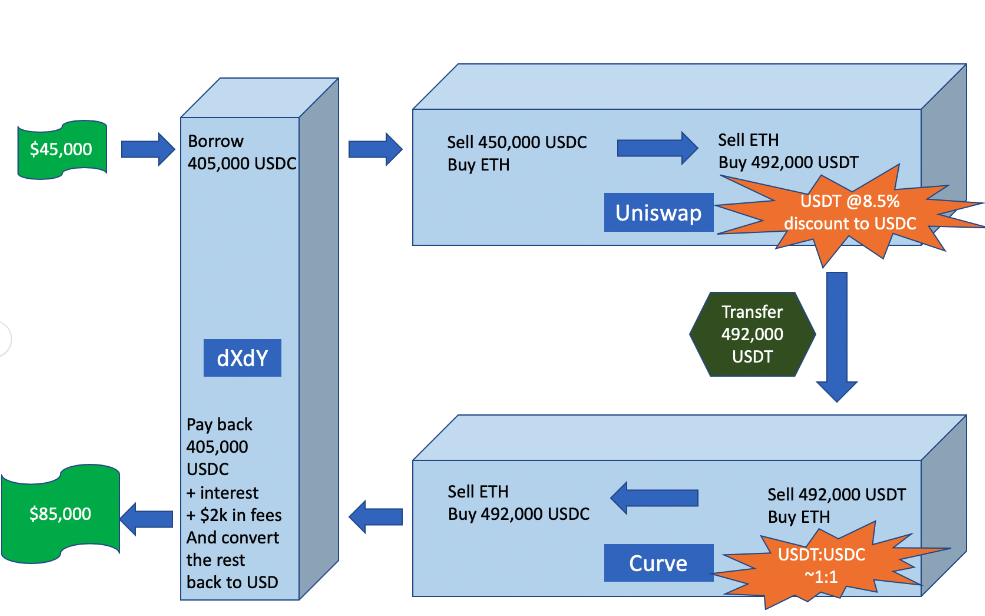 In digital-asset markets, stablecoins like tether and USDC are supposed to represent $1 of value. But their prices often fluctuate on the pubescent trading platforms of decentralized finance, or DeFi.

So cryptocurrency traders are now apparently devising strategies to profit from slinging stablecoins in these fast-growing but often janky and thinly traded markets.

In one Aug. 10 transaction on the Ethereum blockchain, a trader appears to have used a series of transactions in tether and USDC on the decentralized cryptocurrency exchanges Uniswap, Curve and dYdX to net a tidy $40,000 profit off a $45,000 initial investment. That works out to an 89% gain in what was likely a matter of minutes.

The transaction drew eyeballs on Tuesday from flabbergasted (and perhaps admiring) Twitter users.

At first glance, the strategy appears similar to prior exploits of these largely untested DeFi systems, such as in June when a hacker drained $500,000 from the liquidity provider Balancer.

But this week’s operation appears legal, merely a 2020 version of a classic arbitrage strategy used across Wall Street and cryptocurrency markets every day.

Not bad for a few minutes of work. But just imagine how long it took for someone to figure this out.

Trend: Bitcoin’s bullish long-term trend looks to be on a summer holiday this week, with prices generally languishing well beneath the psychological price level of $12,000.

Tuesday’s 7.3% rejection from around $12,000 to a low of $11,137 hints at further downside risk on larger time frames backed by decreasing levels of weekly trade volume.

Bitcoin’s weekly chart reveals the possibility of a sell-off for September – historically a bearish month for the world’s largest cryptocurrency by market cap.

For example, based on data from the last three years, bitcoin has experienced losses between 20% and 36% in September after a peak in August.

The recent rejection at overbought levels near 70.00 on the relative strength index (RSI), a tool used by traders to judge market exuberance, could lead to a deeper pullback.

Immediate support stands at the former resistance level near $10,500 with long-term support hanging at $8,650 along the 50-period moving average on the weekly chart.

A short-term push by opportunistic buyers could drive prices to retest $12,000 once more. However, failing to cement a new yearly high could result in a longer-term pullback as bitcoin heads into its historically poor month.

Disclosure
The leader in blockchain news, CoinDesk is a media outlet that strives for the highest journalistic standards and abides by a strict set of editorial policies. CoinDesk is an independent operating subsidiary of Digital Currency Group, which invests in cryptocurrencies and blockchain startups.
0Shares
DeFiMinutesMoverProfitSlingingStablecoinsTrader