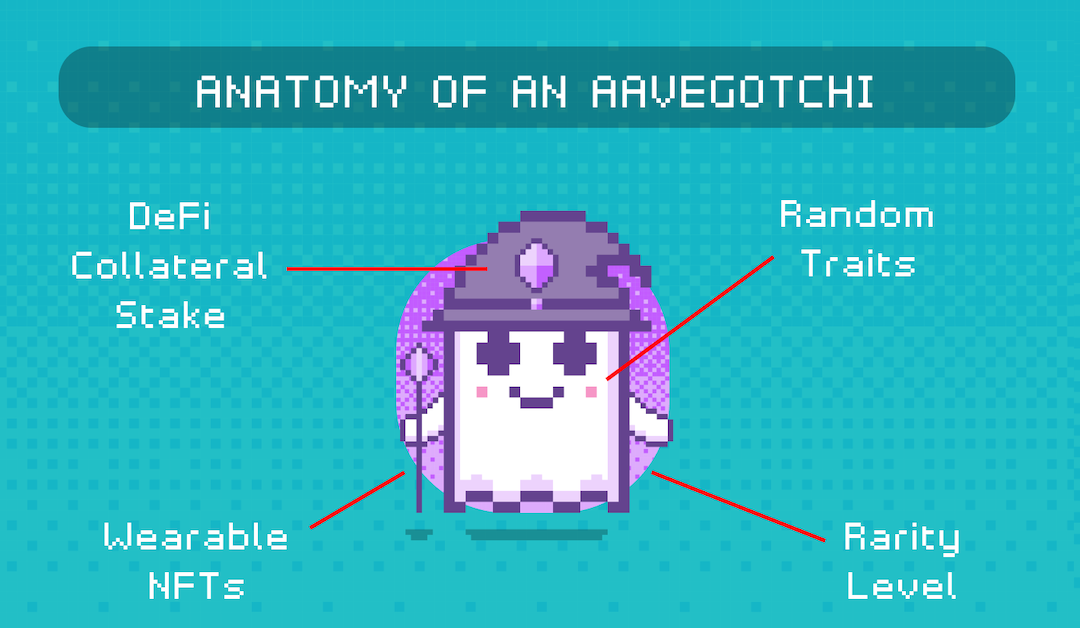 A retro, Tamagotchi-inspired game that came to life at the end of DeFi Summer is launching in full on Jan. 4.

In November, Aave officially announced its investment in Pixelcraft Studios, the Singapore-based company building Aavegotchi. And now the non-fungible token (NFT) game is hosting a series of raffles to reward early adopters ahead of its mainnet launch next month.

But what do these pixelated little ghosts do?

In short, each Aavegotchi is a playable avatar that represents DeFi collateral that is earning yield on Aave. That said, you can also battle the spooky little critters, level them up and equip them with wearables that change traits. As for the ghost theme, that’s because “aave” means ghost in Finnish.

Since an Aavegotchi represents locked assets, its owner can liquidate the underlying stake at any time. But in doing so the Aavegotchi will disappear. So it’s a test to see what happens to playability when characters have real value beyond their gaming value.

Do you keep the NFT? Or would you rather have the crypto assets it represents?

Users can summon an Aavegotchi by staking specific aTokens into their desired gotchi. aTokens (for example, aUSDC, aLINK, etc.) are interest-bearing tokens pegged 1:1 to the value of the underlying crypto asset that is deposited in the Aave protocol.

“We wanted to build a game around aTokens because of how intuitive their benefits are,” explained Coder Dan, Aavegotchi’s pseudonymous co-founder and CEO. “For instance, if you hold 1,000 aUSDC in your wallet now, you will likely find a higher balance in your wallet next time you look. That’s because the interest accrues natively in your wallet, in real time.”

Read more: The Inevitable Marriage of Yield Farming and NFTs

There are two ways to acquire aTokens. Users can visit Aave and deposit tokens as collateral into the Aave protocol or they can swap other Ethereum-based assets for aTokens on decentralized exchanges like Uniswap.

The team behind Aavegotchi is building the game with Aave’s DeFi platform at its heart but it’s also incorporating the latest Chainlink oracles to create a fully on-chain experience – especially with provably random distributions.

“We love whales, we want whales,” Aavegotchi founder Jesse Johnson told CoinDesk in a call, referring to those holding large numbers of tokens. “But at the same time, it’s nice for normal, retail-type people to play the game by holding GHST tokens in smaller amounts. And also have the chance to win high-end items.”

“Everything we’ve done at this point is not the actual game, but all things leading up to it,” Johnson explained. “You’re not winning wearables, but vouchers to claim wearables once the game launches.”

Just like tickets, the Vouchers can be traded on OpenSea or other NFT marketplaces. Johnson said these raffles are really just a stress test and community-building exercise.

The Aavegotchis were set to arrive around the end of 2020 via the first “Haunt” but that date was pushed back so the game could be “Aave V2–made from day one,” Johnson said.

This “haunt” has 10,000 Portal NFTs available, with each one being able to summon one Aavegotchi. Portals can be purchased with the GHST governance token.

Once a portal opens, 10 gotchis will be randomly generated, each with its own trait scores (brain size, spookiness, aggression, energy, etc.) and required collateral type. From the 10, only one Aavegotchi can be summoned and the other nine will fade away, forever lost to the ether.

In fact, the portal itself is an NFT, so users also have the option of reselling the Portal (with all 10 potential choices available) on an NFT marketplace like OpenSea.

“We expect them to sell very quickly, if it’s anything like when our GHST token launched where 6 million dai flowed in in about three minutes,” Johnson said. “So we expect people to buy these 10,000 portals in batches of, say, 50.”

Further down the road, an open-world metaverse called The Realm will launch where Aavegotchis will populate as first-gen crypto pets.

“It’s important to us that owners be incentivized to interact with their Aavegotchis,” said Johnson. “Too many first-gen crypto pets quickly become neglected and are collecting dust in wallets, and that doesn’t really live up this idea of a fully realized crypto pet.”

Within this world, Aavegotchi’s will be able explore on digital land, gather in the town square for votes and access an array of minigames. Comparable metaverses would include the Sandbox or Decentraland.

Such is the way of making DeFi fun.