bit2Big > Africa News > Covid-19 on the rise in Zimbabwe 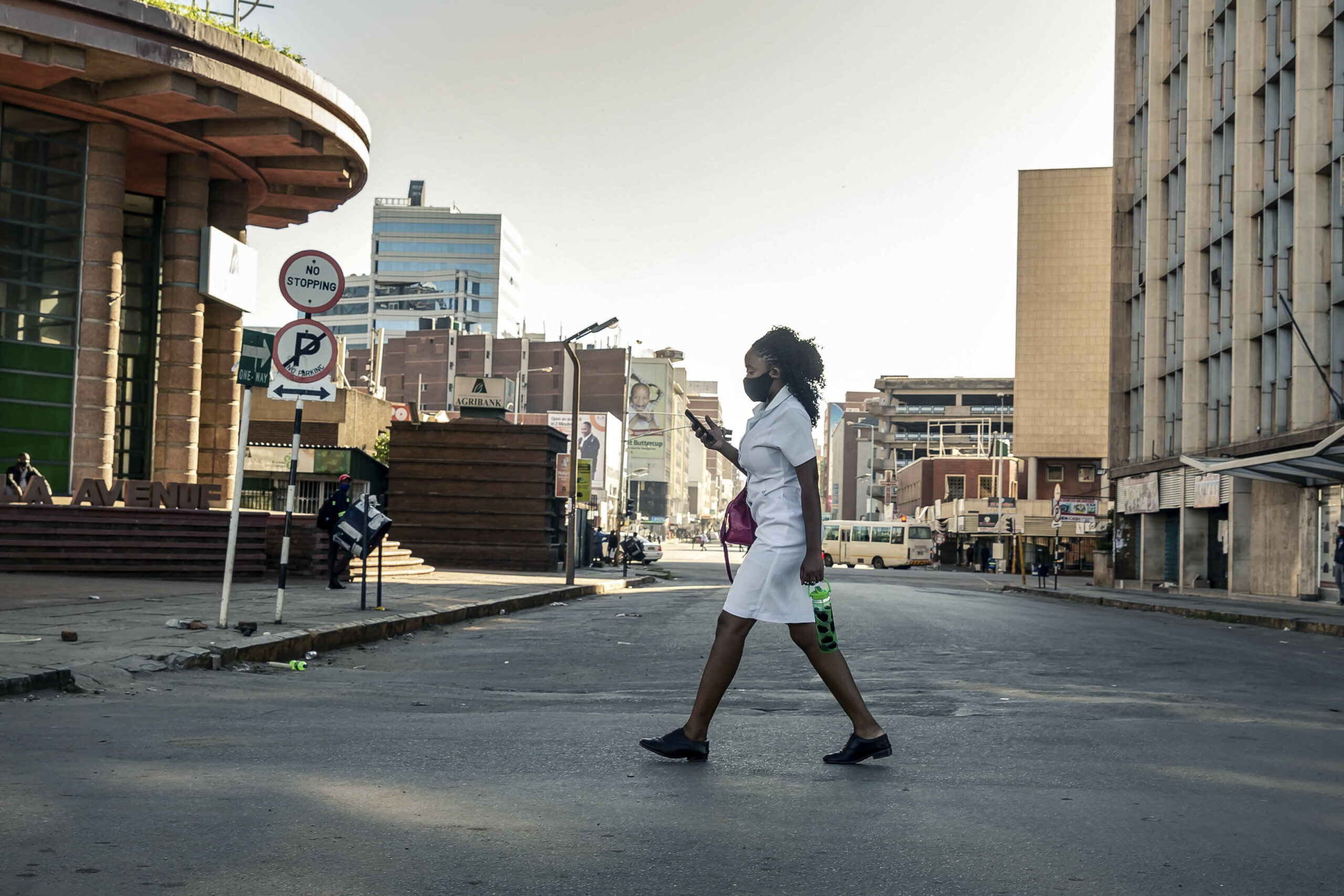 Because he lives with his 84-year-old father and 75-year-old mother, Zimbabwean farmer Paul Mtisi and his family decided to be proactive to prevent Covid-19 from reaching their home. But despite their best efforts, seven people in his household ended up catching the virus during the festive season.

His mother’s brother had succumbed to the virus in August in the United Kingdom, so the family had been cautious. Nonetheless, days before Christmas Day, Mtisi’s mother, father, sister, housekeeper, himself and two others joined the numbers of those infected with Covid-19. Mtisi’s elderly mother, who got her positive results on 26 December, was the only one to be hospitalised. Before the Covid-19 infection, she had an underlying lung-related condition.

“Covid is a terrible experience,” said Mtisi, who is in his fifties and grows vegetables and raises poultry on a plot in the town of Concession in Mashonaland Central Province. “It puts so much pressure on family members who are looking after others. If mum had not been admitted I might have broken down because the pressure was unbearable.”

“It’s sad that a lot of people think the disease is not real. It’s an invisible enemy. Mum was the strictest person; [she] wouldn’t allow people without masks on the premises, but we still got hit.”

Mtisi said that contractors who were not wearing masks came to do some work at his homestead last month. They had complained of a horrible experience of “bad flu” that had knocked them out for a week.

He said they had a “watered-down” Christmas experience as seven people on the plot complained of severe body pains.

“We have all recovered but have not been retested. It’s too expensive at $60 per test. In terms of my mum, you surrender [the Covid patient] at the main entrance of the Covid ward and that’s it. If you didn’t have a phone you are doomed,” Mtisi said.

Mtisi said two members of his family still had a slight cough but as they had entered day 19 from what they think could be the date of infection and were still quarantining, they hoped to resume operations on their property this week.

“I don’t believe the figures of casualties are correct,” said Mtisi. “People are dying in rural areas like ours and people have been talking of a ‘bad flu’ for the last three to four months. Could it be Covid? Only God knows.”

“Our intention was to get mum into a private hospital but all of them had no free beds, so we had to take her to Parirenyatwa [a government hospital]. When we got there we had to join a queue to get admitted. I am grateful to God for the bed she got. It’s tough to leave someone in that place with no means of following up on the progress of your loved one. If you take fruits or toiletries you see a different person every time.”

Due to a spike in cases, Zimbabwe’s government imposed a level 4 lockdown last week. By Monday this week, Zimbabwe had recorded more than 22 000 cases and 528 deaths, the majority recorded since December.

By 29 November, eight months after the first case was recorded, Zimbabwe had 9 950 cases and 276 deaths. The recovery rate was at 85.2% at the end of November, but with more deaths being recorded in recent days this figure has at times dipped down to 58%. Last Tuesday, 5 January, was the darkest day: 1 365 cases and 34 deaths were recorded in a single day.

When Zimbabwe started recording Covid-19 cases in the first quarter of 2020, most were imported cases, but now the majority are local transmissions.

Graham Simmonds is a Victoria Falls resident involved in the tourism industry. He also holds the title of Zimbabwe’s so-called “patient number one” after the first recorded case in March 2020. He said he tested positive after a trip to the UK to promote the country as a tourism destination.

At that time, he said, getting a positive result was almost like a death sentence.

“When I travelled in March 2020, there was no social distancing. You could go to restaurants and there were no sanitisers, there was no lockdown, no mask-wearing. This is when things were deemed normal back in the day,” said Simmonds.

He said returning to Zimbabwe there were reports of Covid-19 cases coming from China and Simmonds’ workplace told him to self-isolate, which worked. His family, friends and colleagues did not contract the virus and for weeks no other positive case was recorded in Victoria Falls.

Simmonds said disregarding health advice was costly, and his case proved that isolation protects others and prevents the spread of the virus.

“People need to respect what has been said by healthcare professionals out there,” he said. “We need to protect those around us. A lot of people who catch this will not actually [die]. But what will happen is that a healthy person will have it and visit someone until eventually a high-risk person will get it. An elderly person or someone with an underlying condition will catch it and pass away.”

Simmonds added, “We are also putting stress on the health services. People are not being careful. So many times I have seen people with masks on their chins, coughing into their hands, high-fiving friends as they walk past. That is how it spreads.”

‘The SA variant is present’

He said the Covid-19 variant identified in South Africa was already affecting Zimbabweans.

Ngwenya said most of the lockdowns imposed across the globe were not effective, adding that China was the only country imposing proper lockdowns. As a result, he said, authorities in Zimbabwe may be forced to extend or tighten the current 30-day lockdown.

“The variant identified in South Africa is almost 100% [certain to be] here in Zimbabwe because of the geographical location and movement of people over the festive season. From the clinical side, patients now are different from the first wave, when most patients were asymptomatic and did not suffer any diseases,” he said.

“Now we are seeing patients coming in coughing, already very sick and some of them dying fast. So from a clinical point of view, the variant is present. The positivity rates are increasing; they are now at 30%. It means one in three people tested turn out to be positive. This is higher than the first wave and higher than the World Health Organisation’s (WHO) recommended rate of less than 10%.

“The positivity rate shows that the virus is in the community. During the first lockdown, the recovery rate was at 95% but now the recovery rates have plummeted to the current rates hovering around 58%, 60% or so,” Dr Ngwenya said.

Zimbabwean authorities told state media that the Covid-19 vaccine roll-out will start in the country as a part of the global WHO initiative, Covax. They claimed that the first batch of the vaccine could reach the country in February.

In an interview with the Mail & Guardian, Dr Agnes Mahomva, chief coordinator of the national response to the Covid-19 pandemic, said it was difficult to come up with an exact timeline for the distribution because, unlike other vaccines, the Covid-19 one was not readily available.

She said the entire country was experiencing spikes in infections.

“We have generally seen numbers going up in every province. It’s not only one place. We have two metropolitan provinces of Harare and Bulawayo that are recording the largest numbers,” she said.

Zimbabwe Nurses Association president Enock Dongo said healthcare workers are overwhelmed by increasing numbers of Covid-19 patients at health centres. He accused the local private sector of not showing appreciation for healthcare workers’ efforts, unlike in other countries where some even received Christmas hampers.

“Healthcare workers do not have adequate PPE [personal protective equipment] and they are putting their lives at risk. They are demoralised. There is [a] need for government, the private sector and people to lift up their spirits,” he said.