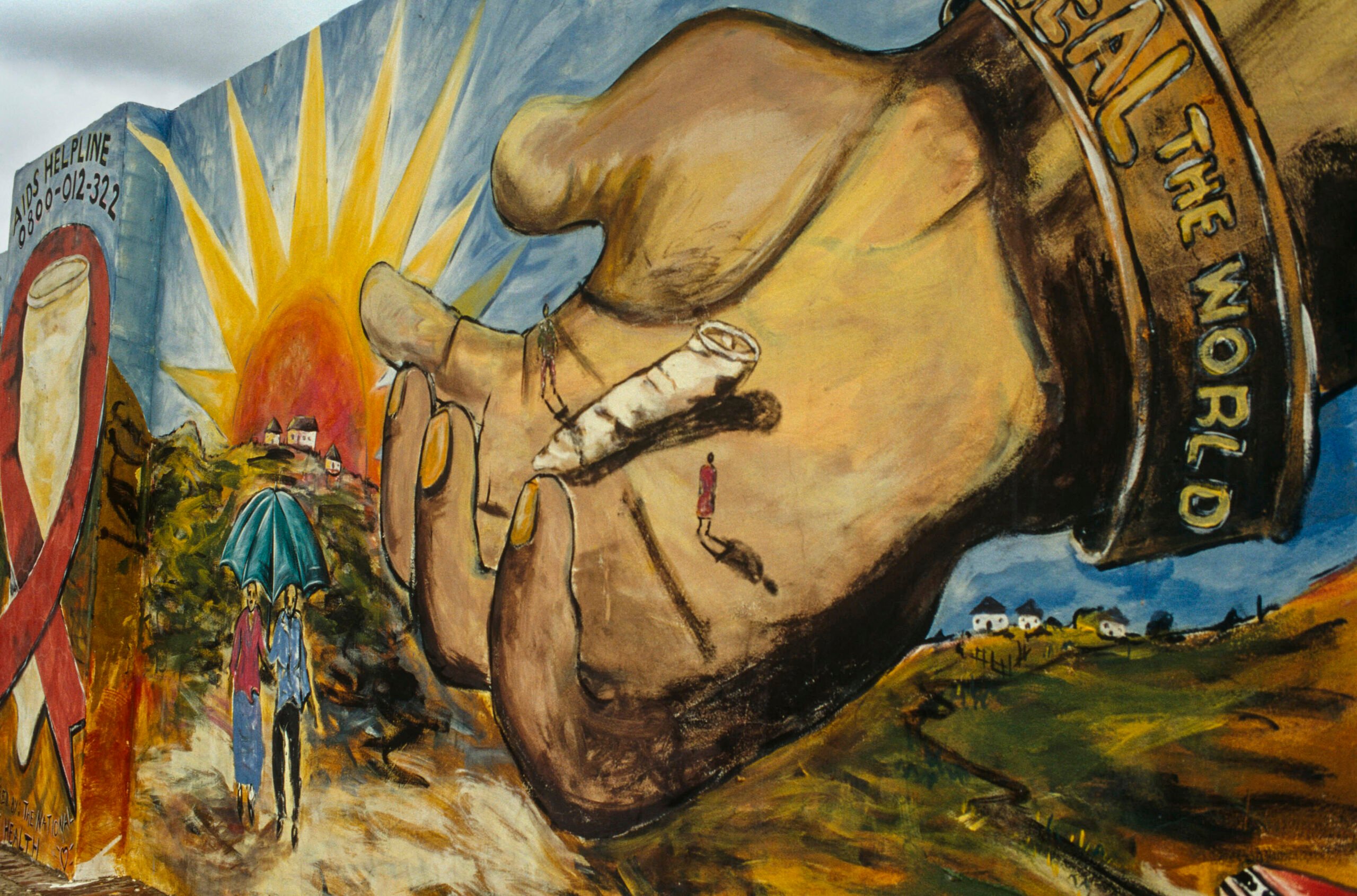 The burdens of HIV, sexually transmitted infections (STIs) and tuberculosis (TB) have been a feature of the South African health landscape for decades. With the advent of the Covid-19 public health crisis that has taken up space, resources and attention, the country runs the genuine risk of losing the gains made in tackling these three disease areas.

For South Africans — particularly young people — the pandemic has endangered their efforts to have safer sex.

Tumisho, who did not want his surname to be used, is a 25-year-old masters student at a university in Limpopo. Every month, without fail, he goes to the campus clinic to collect three packets of MAX condoms — free government-distributed external condoms available in public spaces, including campuses, health facilities and even taxi ranks.

But this changed when the Covid-19 pandemic hit South Africa, and the country went into lockdown to restrict movement to curb the rate of new infections.

Tumisho — like many students across the country — was forced to go back home to his village. He thought he would still be able to collect condoms at his local clinic, just as he did on campus.

But, on two occasions, the clinic was out of stock.

Tumisho was not alone. A lack of access to condoms has become a reality for many South Africans since the start of the pandemic.

And now, almost a year since the first Covid-19 case in South Africa, the country’s public healthcare system is still feeling the ramifications, especially the continuing burden of HIV, STIs and TB.

In April last year, a briefing document from the UN Programme on Aids (UNAids) reiterated this.

“The disruption of economic activities in the context of the Covid-19 pandemic will have far-reaching implications for the provision, accessibility and security of supplies for sexual, reproductive, HIV and other health.

“The global condom supply and distribution is no exception, but thus far, condoms have neither been regarded as essential commodities nor receiving enough attention in contingency planning for Covid-19,” the brief states.

Dr Thato Chidarikire, the director of HIV-prevention programmes at the department of health, confirms that South Africa’s supply of condoms was affected when the ports were closed, because condoms are imported from overseas.

Unprotected sex when condoms are not available

Tumisho and his partner have been together for just more than a year, and they have consistently used condoms since the beginning of their relationship.

But when condoms were out of stock at their local health facilities, the couple ended up having unprotected sex.

“I tried buying [external] condoms, but they were expensive, and I could not afford them,” he says.

At first, the couple didn’t think not having external condoms would affect them. “I was uncomfortable when we became intimate, because we were now adapting to a new thing that we had not done before, and that scared me,” he says.

In the absence of external condoms, the couple did not inquire or even think about using inner condoms. “I usually don’t check for those because they are not put in public spaces where we are. We haven’t used female condoms,” Tumisho says.

Inner condoms have been dubbed a game-changer for HIV and STI prevention, because studies have shown that women have more power to negotiate safer sex when they use them.

The FC2 inner condom has been available in South Africa for 23 years and remains a mainstay of one of the world’s most extensive government-funded inner-condom programmes.

The programme was launched in 1998, with support from the manufacturer, the Female Health Company.

It has experienced steady growth over the past two decades, with the inner condom remaining the only available method for the receptive partner to use to protect themselves from STIs, HIV and unplanned pregnancy.

In 2012, the World Health Organisation cited the inner condom as an essential strategy for pregnancy and HIV and STI prevention.

The manufacturer’s injection of more than R21-million supported the programme nationally: it provided a range of free, multilingual technical capacity and social-marketing support for the product to raise awareness of the inner condom.

More than 630 000 people have been trained to provide advocacy and education about the product and its use, as well as in supplying it to communities. South Africa has played a critical role in scaling up the inner condom programme, with strategies that saw the condom being integrated into sexual and reproductive health services.

The department of health also distributes scented and coloured inner condoms, in strawberry and vanilla.

However, inner condoms are not nearly as widely available as the external condom. They are often hard to find (even in public health facilities), despite demand — and greater access also needs to be accompanied by promotional activities.

According to the current national strategic plan on HIV, STIs and TB, the health department has committed to distributing at least 850-million external condoms and 40-million inner condoms from 2017 to 2022.

Tumisho says he doesn’t consider inner condoms as real condoms. “I don’t even think my woman knows how to use them,” he giggles. “I’m sure she never got the education on how to use them.”

Tumisho is back on campus now, and he says the campus clinic no longer keeps condoms; instead, each residence gets one box of condoms distributed to it every week. One box is not enough for the students: it is finished quickly, and he has raised this matter with university officials.

The UNAids brief also warned that the lack of distribution of condoms would lead to increased incidences of STIs, HIV and unintended pregnancies.

As of 2020, there were 7.9-million people living with HIV in South Africa. The department of health figures show that, in 2017, about 4.5-million people had with gonorrhoea, six million had chlamydia and 71 000 had syphilis.

Phinah Kodisang, the chief executive of the Soul City Institute for Social Justice, says the government has been prioritising Covid-19 at the expense of sexual and reproductive health services.

However, according to sources inside the health department, a campaign to specifically promote inner condoms is in its initial stages.

Additionally, lockdown restrictions have also made it difficult for young people to gather physically to attend HIV-prevention programmes and clubs.

Kodisang warns that if the government continues to neglect sexual and reproductive health services, the country is likely to be left with a new crisis at the end of the pandemic.

A nurse at one of the public clinics in Soweto says the clinic has not run out of condoms during the Covid-19 pandemic, except for inner condoms, which are never available. “The only problem we had, especially under level-five lockdown, was people who were scared to collect their treatment, because they feared they might catch Covid-19. They defaulted on their treatment,” the nurse says. “But we sent our community healthworkers to go to people’s homes to deliver condoms and medication.”

Chidarikire acknowledges that condom programmes, like many other health programmes, were negatively affected by Covid-19, particularly during the more restrictive lockdown levels. Because of the restrictions on movement, the department of health could not distribute as many condoms as it had planned.

“However, as time went and the lockdown restrictions eased, we were able to move condom distribution through our Covid-19 screening [programmes],” she says.

“And also, when we started contact tracing, in most cases, we were trying to include condom distribution [by] our contact tracers within the communities.”

Even though the pandemic necessitated that priorities and focus areas be shifted from other health services, such as sexual and reproductive health, Chidarikire says campaigns continued on digital platforms and reached many young people.

One such platform is B-Wise Health, which ran a three-month mini-campaign on Facebook, Twitter and Instagram about the consistent use of condoms and STI education. Chidarikire says that partners such as Love Life and Soul City also ran and continued running campaigns on their digital platforms about condom use.

The department of health is also looking at public spaces where it can continue to distribute condoms, even when other spaces are closed. These include taxi ranks and train stations.

This article was written in partnership with The African Alliance, a nonprofit advocacy group founded to amplify and accelerate the realisation of health rights for all. You can follow the organisation at @Afri_Alliance on Twitter or visit their website.