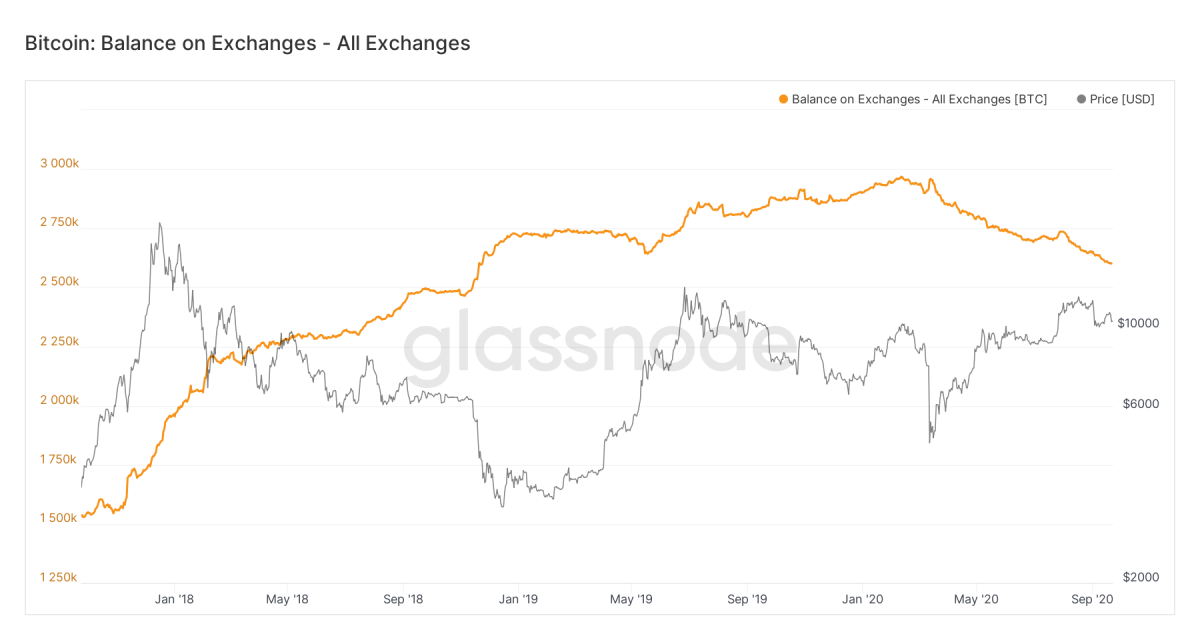 The balance of bitcoin on major exchanges has hit its lowest levels since November 2018. Yet unlike that time, when bitcoin was in the depths of the crypto winter, some see this current spate of low bitcoin balances on exchanges as a sign that a new generation of investors is putting its money in it for the long term.

The last time bitcoin balances on exchanges were at this low a point was in November 2018, according to data from Glassnode. A hard fork on Bitcoin Cash that month may have also caused the declining bitcoin balances on exchanges since some owners were moving their bitcoins to private wallets in order to claim the new tokens from the fork. Bitcoin then continued its bearish trend into the beginning of 2019, before it recovered in April of that year.

Long-term holders as a possible reason

Low bitcoin balances on centralized exchanges do not necessarily imply a bearish market trend. In fact, it could reflect a bullish view from bitcoin holders, as they move to longer-term holding strategies, such as cold wallets, Glassnode tweeted back on April 14.

That may be the case with this most recent drop in balances, according to Mike Alfred, CEO of Digital Assets Data.

“There’s no reason to sell now when you have large corporate treasuries like MicroStrategy buying the asset now,” Alfred told CoinDesk in a phone interview. “Why would you be selling when you’re at the beginning of a wave of potential corporate treasuries and institutional investors coming in?”

South Korea-based data provider CryptoQuant also captured the declining bitcoin balances on exchanges. According to the company’s CEO, Ki Young Ju, this means there are fewer bitcoin holders who could sell their bitcoins on exchanges, avoiding a possible major market correction.

However, this decline hasn’t been a straight line down, according to another crypto data source, Chainalysis. Their data show daily net inflow of bitcoin to exchanges logging its biggest single-day increase on Sept 21 since the market crash on March 12. Philip Gradwell, an economist at the company, told CoinDesk that the number indicated “a weakening market.”

The rise of bitcoin on DeFi

The latest bitcoin balance drop on exchanges started in mid-March when prices took a steep tumble to a 10-month low, according to Norwegian crypto analysis firm Arcane Research’s weekly report on Sept. 22.

Arcane Research attributed the decreased bitcoin balance on exchanges partly to the white-hot decentralized finance (DeFi) sector, where bitcoin is being tokenized on Ethereum by those lending the cryptocurrency in exchange for yields.

“In the same period [since March 15, 2020], more than 100,000 BTC have found their way into Ethereum protocols, which could explain some of the outflow,” the research team wrote.

As CoinDesk reported earlier this week, tokenized bitcoin has become one of the largest assets on DeFi. Currently, more than 108,000 BTC worth some $1.1 billion minted from seven issuers, according to Dune Analytics.

An influx of less-experienced investors

Others, at the same time, say that a new flux of crypto investors since the coronavirus pandemic started could be the reason for the low bitcoin balance on exchanges. These investors, coming mostly from traditional financial markets, may prefer “white glove” services such as a crypto investment fund to manage their crypto portfolios for them, instead of going to crypto exchanges themselves.

As a result, the bitcoin balance on exchanges has been dropping this year both consistently and significantly.

Digital Assets Data’s Alfred said that crypto fund companies such as Grayscale (a subsidiary of Digital Currency Group, which also owns CoinDesk) are buying a large amount of bitcoin, as both high-net-worth individuals and institutions are putting new capitals into the crypto market. For example, at the start of Q3, Grayscale had $4.1 billion in assets under management (AUM). As of Sept. 23, its AUM was $5.5 billion.

Traditional investors may be concerned with easy monetary policies of the Federal Reserve, other central banks and governments around the world. But unlike the old generation of crypto investors, who were often technologically sophisticated  early adopters, new crypto investors are less familiar with how crypto assets work and therefore less comfortable with holding and managing bitcoins themselves, according to Alfred. They thus turn over their investment capital to more experienced firms.

“These are people that don’t know much about bitcoin,” Alfred said. “They just know that they want to own something (in crypto) and they don’t want to do it themselves.”

This sentiment is echoed by Babel Finance, a Hong Kong-based crypto lender. In a WeChat conversation with CoinDesk, Simons Chen, executive director of investment and trading of the company, said that bitcoin balances on crypto exchanges have been taken away by both decentralized exchanges and crypto investment funds.

“Institutional investors are withdrawing their bitcoin from exchanges and transferring them elsewhere,” the chat wrote. “So the low bitcoin balance on exchanges is happening not because of any market correction, and as a result, there has not been much pricing pressure.”

Notably, bitcoin’s price – which is known for its volatility – has been becoming less volatile this year. Alfred said it is partly due to more capital flows into the leading cryptocurrency, as well.

“I think volatility has come down pretty dramatically in part because there’s so much traditional capital coming in, which really dampens the volatility,” he said. “You have this very supportive bid coming from all this new money coming in that believes in the long-term fundamental story and is not buying just to sell right away.”

Previous PostZuma vs Ramaphosa? Neither is the leader South Africans deserveNext PostHair to the rescue as oil spills blight coastlines