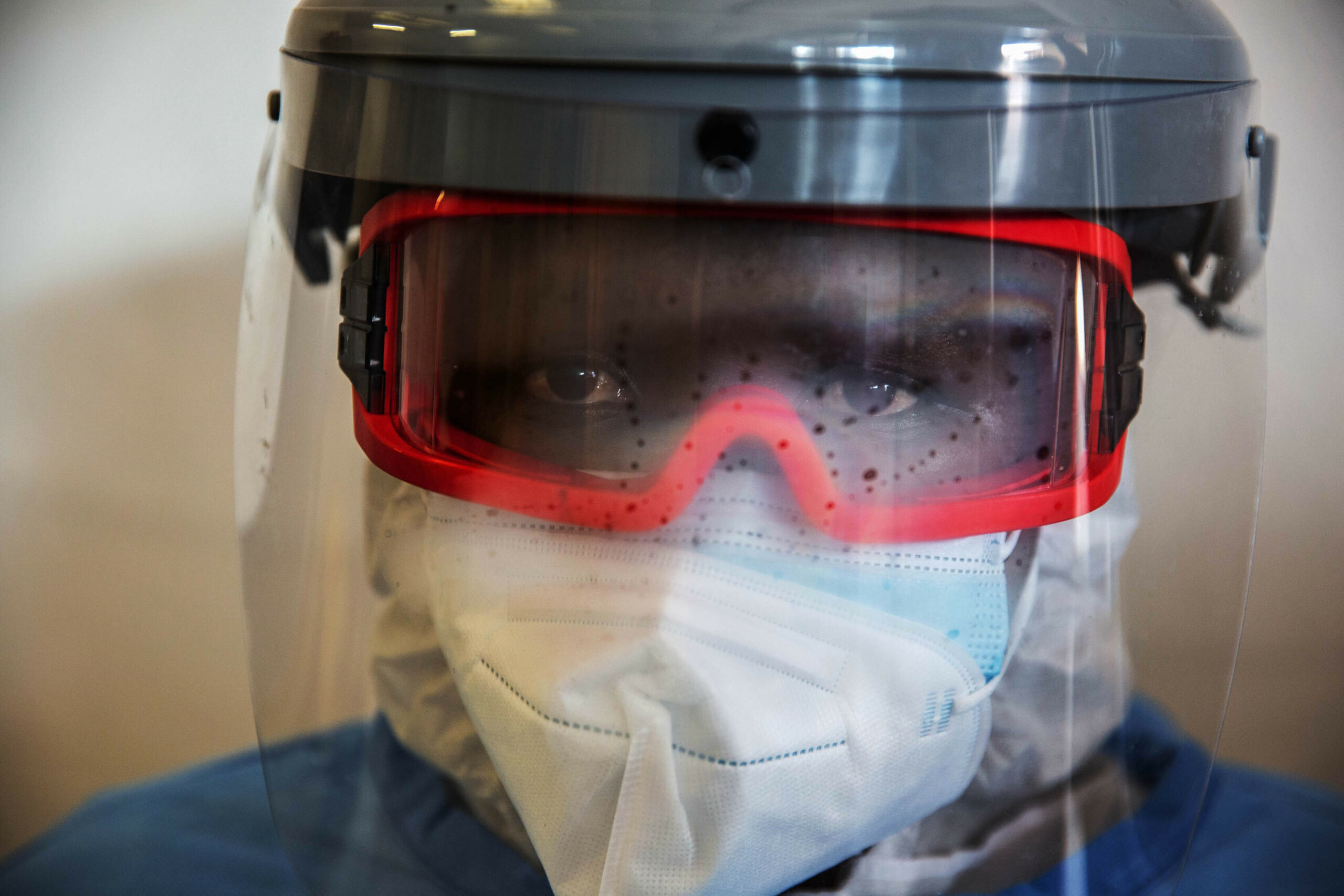 Nurse Nosipho Khanyile removes a bulging plastic bag from her locker in the women’s changing room of the Nasrec Covid-19 field hospital in Johannesburg.

The packet is full of personal protective equipment (PPE) such as aprons, gloves, a visor and masks. Each morning, Khanyile and her colleagues get two sets of PPE so that they can change into a new set after lunch.

Khanyile is getting ready to go into the “red zone”, where Covid-19-positive patients are cared for at the field hospital.

Nasrec is split into three colour-coded zones: Red for people infected with Covid-19, yellow for people who might be at risk of being infected and green for those in the clear.

In preparation for the peak — when the number of Covid-19 cases was expected to surge past the number of available beds — the facility was set up to take the pressure off Gauteng’s hospitals.

Nasrec is also one of the more than 400 government facilities in the country where people can quarantine for free if they believe they have been exposed to the virus. Only a third of these facilities were in use in July, Bhekisisa reported last month.

Active Covid-19 cases have been steadily declining in Gauteng for the past three weeks, government data shows.

Patients at Nasrec aren’t sick enough to be on ventilators, but some may be getting medical oxygen administered through a nasal tube. Still, the patients are highly contagious if they’re in the red zone, so Khanyile is careful to don the gear correctly. The exercise takes her about 10 minutes.

In April, the Human Sciences Research Council surveyed 7 607 health workers in South Africa to get answers to a range of questions, including how they feel about working on the frontlines, how much they know about the virus and what training they received about how the virus spreads.

Of all the health workers surveyed, nurses like Khanyile were the most worried about getting infected with the virus and possibly passing the infection on to their families at home. This cadre of health workers also made up the majority of the survey’s participants — nearly a third — and they’re right to be worried.

Health department data shows that nurses are most at risk of Covid-19 infection. By August 4, nurses made up more than half of the 27 360 Covid-19 cases recorded among healthcare staff; most of the infected nurses (80%) worked in the public sector. The virus had claimed the lives of 240 health workers by early August.

Nextdoor in the men’s cloakroom, Kutlwano Molele is getting ready to go into the red zone too.  He has been working as a cleaner at Nasrec for a couple of years, but these days it’s a very different place.

For instance, the expo centre is deadly quiet, save for some music playing over the speaker system. It’s a stark contrast to the live shows and conferences usually held here. The yellow train that would often glide over pedestrians’ heads on a monorail transporting delegates between venues hasn’t run for months.

And what used to be an outside food court, packed with people queuing, is now a mostly deserted area for Covid-19 patients to get some fresh air, the seats spaced far apart.

This zone is cordoned off, and red, yellow and green dots are painted on the floor around the fencing to indicate to staff how close they’re getting to an area where they could be infected with the virus.

The three-tier system in place in many hospitals across the country is used as an infection-control measure and has proven to be a lifesaving tool in South-East Asian countries such as Taiwan. The region was hard hit by other outbreaks of respiratory diseases, such as Severe Acute Respiratory Syndrome (SARS) in 2002, which is caused by a coronavirus, SARS-CoV, and 2009’s outbreak of the H1N1 virus, also known as swine flu.

In 18 Taiwanese hospitals that adopted the system, zero health workers and only two patients contracted the virus that causes SARS from hospital outbreaks, a 2011 study in the Journal of Hospital Infection found. The researchers monitored the hospitals for three weeks at the peak of the epidemic. By stark contrast, the 33 hospitals studied without the colour-coded system, saw 115 health worker infections and 203 patients picking up the virus from inside the hospital.

Back at Nasrec, Molele never dreamed he would be working in a field hospital during a pandemic.

He explains: “I feel like I am contributing towards saving my country. I am representing South Africa. It’s the best experience ever for me.”

Getting dressed with Molele is Moricio Silimone. He’s a plumber, and is heading into the red zone to check on the system of drains, showers and toilets that have been installed in the floors of Nasrec’s converted conference rooms.

For Silimone, making sure the field hospital works well is an act of care for South Africans sick with Covid-19 and for those closest to him. “I feel like we are heroes working here. It could be me or my family that need to come to this hospital.”

Outside the field hospital, massive tubes pump air from inside the Covid-19 wards to the outside world. The pipes function as the lungs of the facility, ensuring the wards are adequately ventilated. The air is clean by the time it’s spewed out of the shiny cylinders 3m above the ground, explained Nasrec’s facility manager, Vis Naidoo, when Bhekisisa visited the facility in July.

He clarifies:  “The air from inside goes through a filter on its way out, and on its way back in.”

Just out of sight, to the right of the pipes, are two towering cylinders full of medical oxygen. There are two more on the other side of the building — enough to last the facility for seven days, Naidoo says.

It can take weeks for Covid-19 patients to recover fully, and they may find their muscles are weak, or that they have lung damage or even delirium and mental health problems. All these conditions are, at least partly, brought on by long periods of critical illness and bed rest or being on a ventilator, especially in the case of older patients, according to a joint report by the World Health Organisation (WHO) and the Pan American Health Organisation (Paho). Paho is a specialised international health agency for the Americas.

All these conditions are part of what is called “Post Intensive Care Syndrome” according to the United States research organisation, the Mayo Clinic.

That’s where Whitehead comes in.

Physical rehab, the WHO report explains, can help prepare patients to be discharged and can prevent them from deteriorating at home and being readmitted to the hospital.

Whitehead’s patient, Bongiwe Tshabalala, is usually the one taking care of others — she’s a trauma nurse at Chris Hani Baragwanath Hospital.

She explains: “I was never afraid. I am surprised that I became so sick. My colleagues weren’t as sick as me.”

Tshabalala is eager to get better so she can get back to work.

“I must just get better now so I can help other patients. People must not be afraid of Covid-19.”

At the end of a shift in the red zone, staff must remove or “doff” their PPE in a special decontamination area before they can go home.

The only part of the elaborate protective outfit they’re allowed to keep is their plastic visor, which can be sanitised and reused, says nurse Nosipho Khanyile.

Everything that is thrown away at the field hospital , whether it’s masks, aprons, food or even newspapers discarded in the facility’s recreation rooms, is regarded as medical waste and is dumped in a marked shipping container outside the facility until it is removed, Vis Naidoo says.

Naidoo has worked for South Africa’s health department for two decades, and he’s worn a tie every day.

This story was produced by the Bhekisisa Centre for Health Journalism. Subscribe to the newsletter here.