bit2Big > Africa News > Asked and answered: Six things you need to know about the new Covid-19 variant in South Africa 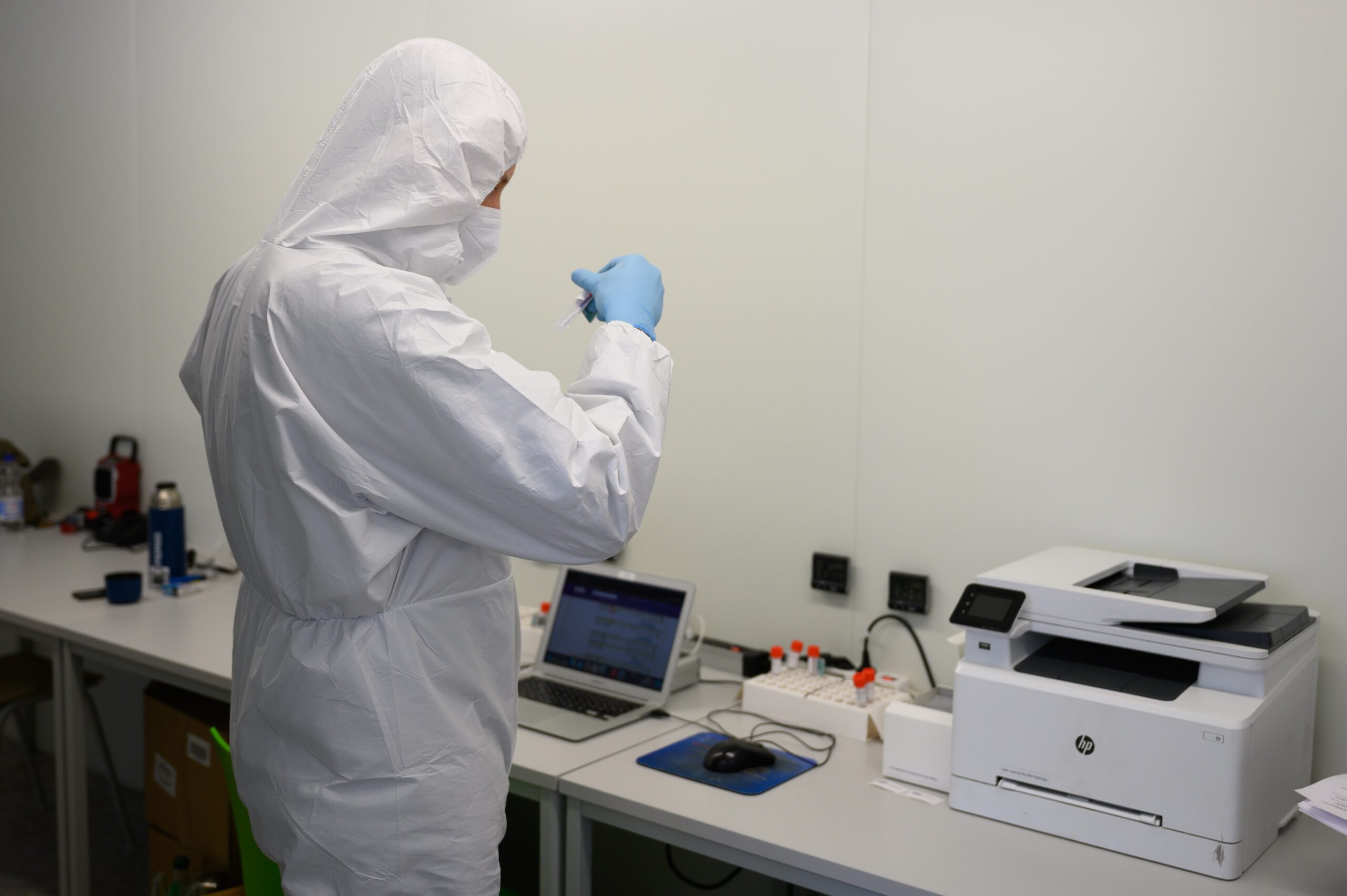 South Africa’s department of health gathered the country’s best and brightest for a virtual briefing on Monday evening. Here scientists presented the latest findings on a variant of the new Covid-19 — called 501Y.V2.

This variant was first identified in South Africa in 2020 by a genomics team led by the KwaZulu-Natal Research Innovation and Sequencing Platform (KRISP) at the University of KwaZulu-Natal.

Following the December announcement of the new variant, researchers have been working to answer key questions about what this means for South Africa’s epidemic. Monday evening’s two-hour presentation sought to share what they’ve learnt.

In the discussion, the country’s Covid-19 brains trust shared what this variant means for South Africans, new figures on the impacts of 501Y.V2 on the healthcare system and plans for future studies.

But if the technical briefing left you scratching your head then this summary is for you. The answers to these six questions will tell you everything we know — and what we still don’t — about the 501Y.V2 variant currently spreading through South Africa.

Viruses change over time as they spread and replicate. These changes are called mutations, Dr Richard Lessels, an infectious diseases specialist, explained. Mutations can be classified as variants or strains. Which classification is followed is largely a matter of scientific convention and consensus.

Professor Tulio de Oliveira, a bioinformatician, went on to explain that the naming conventions for the new variant were adopted at the early stages of the virus’ spread. The international scientific community chose to classify the virus in terms of variants and lineages — these are changes which “live for a short time and that could be controlled with normal interventions”, De Oliveira said during the briefing’s question and answer section.

The term “strain” is usually used to classify bacteria, De Oliveira added. Viruses can be called strains too, but this is less common. Normally, something is called a strain if the changes to its structure are long-lasting. Since it is too early to tell what the current mutations mean for SARS-CoV-2 or how long they will last, the better terminology to use at the moment is “variant”.

The key takeaway on Covid-19 terminology is: we shouldn’t call this the South African variant. This fairly recent change in naming practices is to avoid placing blame or creating stigma around the country that first identified a virus. Instead, stick to calling the new variant 501Y.V2. After all, a novel coronavirus by any other (country’s) name would be incorrect.

For more, read our explainer on variants and mutations here.

Dr Lessels explained that some mutations in viruses could have a functional significance — these are changes that affect how the virus behaves. One such change is how efficient the virus is at spreading.

Unfortunately, the 501Y.V2 variant is 50% more transmissible than the previous variants of the Covid-19 virus. How do we know this? Maths.

Professor Salim Abdool Karim, the co-chair of South Africa’s ministerial advisory committee on Covid-19, explained that it took 107 days during the first wave for the Western Cape to reach its first 100 000 cases. It only took 54 days for the province to get to the same number of cases during the second wave.

3. Is this new variant more severe?

Prof Abdool Karim said that a comparative look at the first 100 000 cases recorded during South Africa’s first and second waves gave us a similar proportion of hospital admissions.

The Western Cape started seeing cases of the new variant in about mid-October and November last year. A large proportion of the province’s Covid-19 cases from this period onwards were assumed to be 501Y.V2 infections and signposted the start of the second wave.

Davies and her team found that in both waves:

All this together suggests that 501Y.V2 isn’t any more severe when compared to older variants of the virus.

As Dr Davies says: “What we see is that the risk of death when we take into account age and comorbidities, and the number of admissions that hospitals are experiencing, is no different between the upsurge of wave one and the upsurge of wave two, which would suggest that this new variant is not causing more severe disease.”

4. Can you get re-infected with the variant?

Re-infection refers to someone testing positive for a virus 90 days after being disease- or virus- free, explained Professor Koleka Mlisana, the executive manager at South Africa’s National Health Laboratory Services. This happens when your body’s immune response — the way it recognises and fights against foreign bodies, such as viruses — is either inadequate or short-lived, Mlisana said.

Using data from South Africa’s Covid-19 tests, scientists looked to see if there were any cases of people testing positive for the virus twice, with a minimum 90-day interval between the tests. As of 6 January, the data showed that there were 4 000 cases like this, Mlisana said.

This suggests that re-infections are possible.

Mlisana added that the second wave had seen an increasing number of re-infections — this is likely due to the higher case numbers overall being seen in the country’s second wave. But, according to this analysis, the proportion of re-infections has remained relatively constant across both the first and second waves in South Africa. This means that the risk of re-infection is the same for the new and older variant.

“Bear in mind, we’re only talking [about] a month so far,” Mlisana cautioned.
“So this is an area that we need to look at very closely. In fact, we are going to continue to monitor this data and look to see whether there’s any change.”

A prospective study is currently underway on the rate of SARS-CoV-2 infections and re-infections in health workers and other high risk groups in South Africa, and a clinical study is on the books too. Data from studies like these will help give us more information about who is more likely to get re-infected and what drives re-infection.

5. Will vaccines be able to protect you from getting infected with the new variant?

It’s too soon to tell.

The short, unsatisfactory answer is that we just don’t have enough information to fully answer this yet.

Several scientists are working on trying to answer this question, but at this point there just isn’t enough information to know for sure, cautioned Prof Abdool Karim.

Why is this a concern?

Antibodies are our bodies’ first line of defence against most foreign invaders, such as viruses. These proteins can help our bodies identify and ward off infections from a virus — this is called immunity. Antibodies form one part of this immunity, as they help our bodies to recognise the structure of a virus and flag it as something that needs to be destroyed. Vaccines work by triggering this kind of response, even if you have not previously been infected with a virus.

But the current Covid-19 vaccines that we have train your body to recognise a part of the virus that is changing in the new variants being identified around the world.

The worry is that antibodies from the original virus won’t be able to recognise these new variants, which is something we are seeing in labs, explained Dr Alex Sigal, a virologist at the Africa Health Research Institute.

This, however, doesn’t mean that we won’t have some immune response to the new Covid-19 variants, such as 501Y.V2. That’s because, while antibodies are the first line of defence, they aren’t the only weapon our body has against viruses.

As Dr Sigal explained, vaccines stimulate different types of immunity and are more complex than simply looking at how antibodies respond to these variants in a lab setting.

Dr Sigal concluded: “The problem here is that the vaccines were designed for the previous variants. Now we don’t know what’s going to happen and vaccines are very complex and can elicit a lot of different types of immunity. So what results we have now are not indicative that the vaccines will not work.”

“No,” says Prof Abdool Karim. “Not at this stage. Not with the evidence we have at this point.”

He said that the best course to follow is sticking to the planned roll-out.

This is partly because the available Covid-19 vaccines are among the most effective for any disease. The leading candidates, developed by Pfizer and Moderna, have a reported efficacy of 95%, which is incredibly high and on par with the measles vaccine (one of the world’s most effective jabs). These highly effective vaccines will help South Africa reduce incidents of clinical illness and hospitalisation — something that is critical as the new variant continues to put increased pressure on the country’s healthcare system.

The road ahead is long, challenging and filled with unknowns, but these are not reasons for us “to hesitate to use a vaccine that saves lives”, cautioned Prof Abdool Karim.

This story was produced by the Bhekisisa Centre for Health Journalism. Sign up for the newsletter.