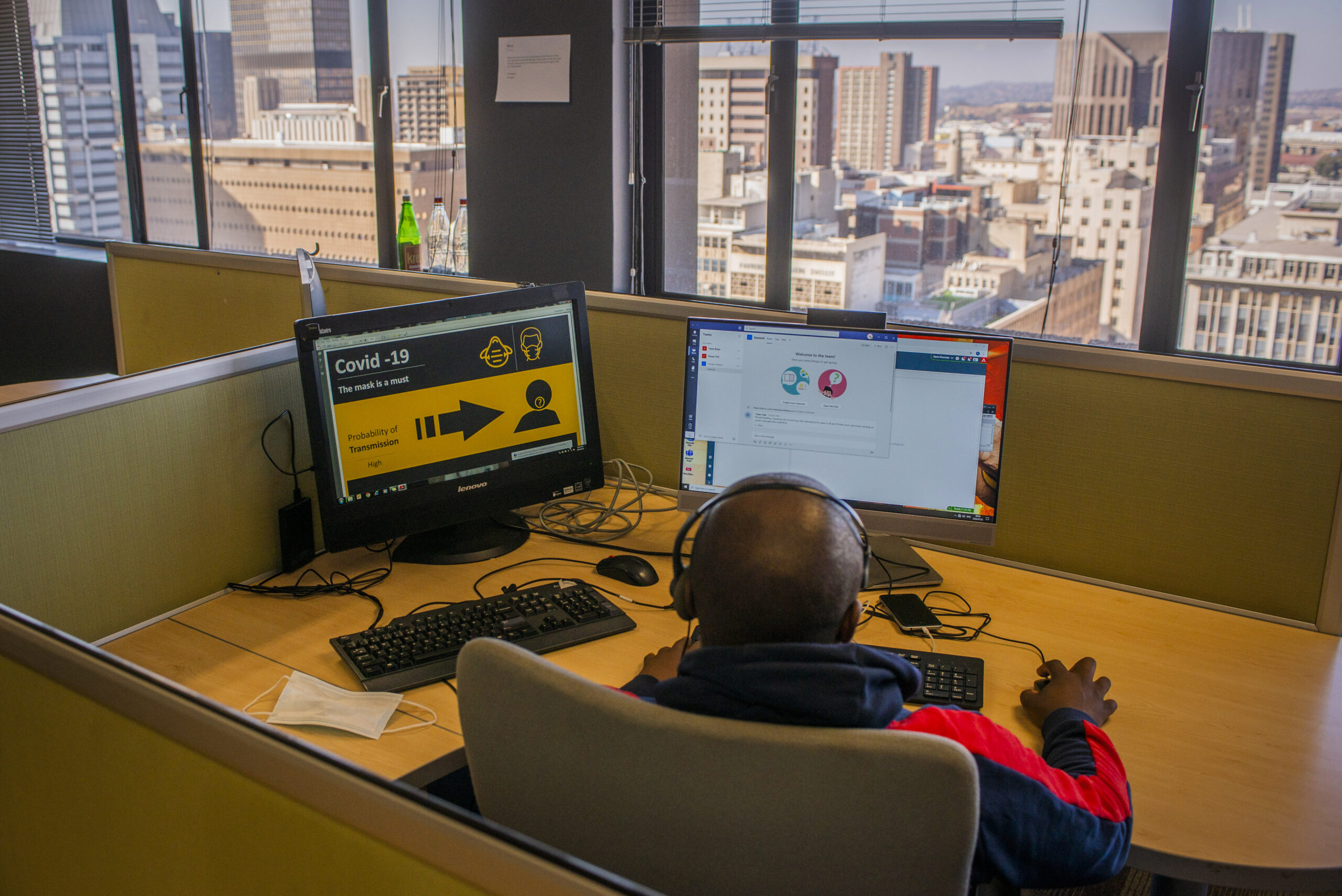 Expanding internet connectivity is not a new issue in Africa. Despite some progress, notably in internet coverage, the growing usage gap (access to the internet, but the inability to use it) has been steadily increasing. In sub-Saharan Africa, it went from 36% in 2014 to 49% in 201, which is twice the global average. This is because of several factors, including the affordability of data and handsets, as well as digital literacy.

The Covid-19 pandemic further galvanised the debate on connectivity in Africa. In connected regions of the world, accessible, reliable and affordable internet allowed children to continue their education uninterrupted. In contrast, by some estimates, 250-million primary- and secondary-school children were temporarily forced out of school in Africa as a result of lockdowns.

Internet access gave respite to some sectors of the economy, thanks to a well-developed e-commerce industry. This allowed many employers to shift work from the office to the living rooms of their employees when possible, thus contributing to reducing human movement and increasing the effectiveness of lockdowns, while maintaining their businesses activities. The psychological effects of lockdowns were also mitigated, as much as possible, through connectivity, which not only provided entertainment, but also video links with family and friends.

It is, thus, difficult to imagine a discussion on Africa’s “post-Covid-19” recovery that excludes affordable and reliable internet access as a key priority. But digital transformation is not a neutral space and policy choices on how to implement the digital agenda in Africa are bound to be shaped by the geopolitical tech war between China and the West.

Although reliable data is scarce, it is estimated that 70% of Africa’s 4G infrastructure relies on Huawei technology. The Silk Road initiative further contributes to entrenching this position. Until former United States president Donald Trump introduced a ban on the use of Huawei technologies in the US, it was assumed that it made financial sense for African countries to build on pre-existing 4G infrastructure, when possible, and thus maintain its ties with Huawei. Indeed, even in the European Union, which has more diverse telecommunications infrastructure, the possible exclusion of Huawei technologies would cost its telecommunications sector an estimated additional $62-billion to roll out its 5G network and would delay roll-out plans by 18 months.

Although the ban in the US did not discourage some (including Rain, South Africa’s data-only mobile network to launch the first commercial standalone 5G network in Africa using Huawei technologies), it did put a break on the plans of several large internet providers across the continent. Earlier this month, Safaricom, East Africa’s largest telecommunications company, announced that it would be putting its 5G roll-out in Kenya on hold. Although the company officially cited a change of strategy (focus on converting more clients to 2G, 3G and 4G), the question remains of whether the fact that Kenya’s 5G network was built by Huawei played a role in the company’s decision.

Other large African telecommunication companies, which have financial links to countries in the West such as the UK, have also sought to diversify their providers to avoid future challenges. MTN has, for instance, pivoted towards Sweden’s Ericsson to launch its 5G network in some South African cities and elsewhere on the continent such as in Benin. Telma Madagascar also opted for Ericsson. And Finland’s Nokia also secured a three-year deal with Togocom to build the country’s 5G network. But Huawei remains the major provider on the continent on account of its cost and pre-existing footprint.

Concerns about international pressure on Huawei and its effects on the speed of African countries’ conversion to 5G have led some African leaders to react openly. South African President Cyril Ramaphosa noted, for instance, “We cannot afford to have our economy to be held back because of this fight [between the US and China].” Indications that the Biden administration will maintain aspects of the Trump policy towards China, including on technology, means that African countries are likely to continue to feel the heat from the tech war.

But infrastructure is only the tip of the iceberg when it comes to the debate about digital transformation. Just as critical is the use of data and standards; in other words, how the infrastructure of the internet works, how content is used and how mobile devices communicate.

The EU is one region that understood this early on, so much so that the bloc now openly speaks of “digital sovereignty”. Put simply, “digital sovereignty” is about a triangle: Who builds the infrastructure and the hardware to use it; who controls the data, especially with the projected rise of the internet of things and artificial intelligence (AI); and who sets the standards. In the words of the European Council on Foreign Relations: “referees do not win the game”. The EU understood it has to set the rules.

In 2020, the European Commission unveiled its digital strategy package. In it, the EU opted for a mix of protectionism and standards promotion as a tool to position itself as a future global leader of the digital economy. But securing digital sovereignty in a world in which borders mean little, requires alliances and followers. It was not lost on the EU that there is a potential ally in the person of the newly elected US president Joe Biden, who, writing on 5G technologies and AI for Foreign Policy in the spring of 2020, made the case for a stronger alliance between his country and its “democratic allies” to avoid a situation whereby “the rules of the digital age are written by China and Russia”. Shortly after his election in November, the EU proposed to establish a “EU-US Trade and Technology Council” to counter China’s rise in the digital sector.

But the EU is not only looking across the Atlantic. It has, in fact, been looking south, to Africa, for some time now. Attempts to build a “digital alliance” with Africa are part of the EU’s digital strategy, which lists the “develop[ment of] digital standards and promot[ing] them internationally”. This is further anchored in the new Africa-Europe digital economy partnership of the EU-AU digital economy task force”, a loosely organised group of private sector and institutions, which advocates for  the development of “policies and regulation in areas such as telecom[munications], data economy, data protection and privacy, startup laws, e-commerce and e-government”. This means that regulatory convergence with EU regulations such as the general data protection regulation or rules related to e-commerce will become central to the agenda.

China has also joined the race to control the digital economy by announcing the global data security initiative” in September 2020. Details on the initiative are lacking, but China’s proposal seeks to set the rules at the multilateral level. As internet data becomes central to economic and industrial development, it is likely that the race to influence standards and internet rules will become central to international diplomacy.

Greater regulatory convergence of standards is not something to be taken lightly. It is, for instance, critical to assess, independently, what effect regulations on telecommunications would have on Africa’s own “sovereignty” when it comes to the choice of infrastructure providers, as well as who is keen to invest large sums to provide the continent with more choice.

Considering that cheaper phones, largely sourced from China, have increased accessibility for the average African, how would standards that are not anchored in this reality affect attempts to close the usage gap? What do these standards mean for African countries’ industrial policy for those countries in which products are being produced? What does regulatory convergence on data use, which is already happening quietly under the umbrella of “technical assistance”, mean for the future of the economy and privacy of African citizens? What does regulatory convergence on e-commerce with a third party mean, while countries on the continent are still negotiating the e-commerce protocol of the African Continental Free Trade Area?

As the race for the dominance over the economic assets of the future intensifies, African countries will need to make choices that consider their interests carefully, striking the balance between affordability of technology, quality standards and internet governance rules that adequately protect their citizens and the economy. But the train is moving already and the continent may find itself yet again in the position of a reluctant follower or being left out. In the absence of a concrete digital transformation strategy in most countries, this was unavoidable. But it is not too late. Action, including articulating an African voice in the global debate, is still possible as long, as the leadership understands what is at stake.