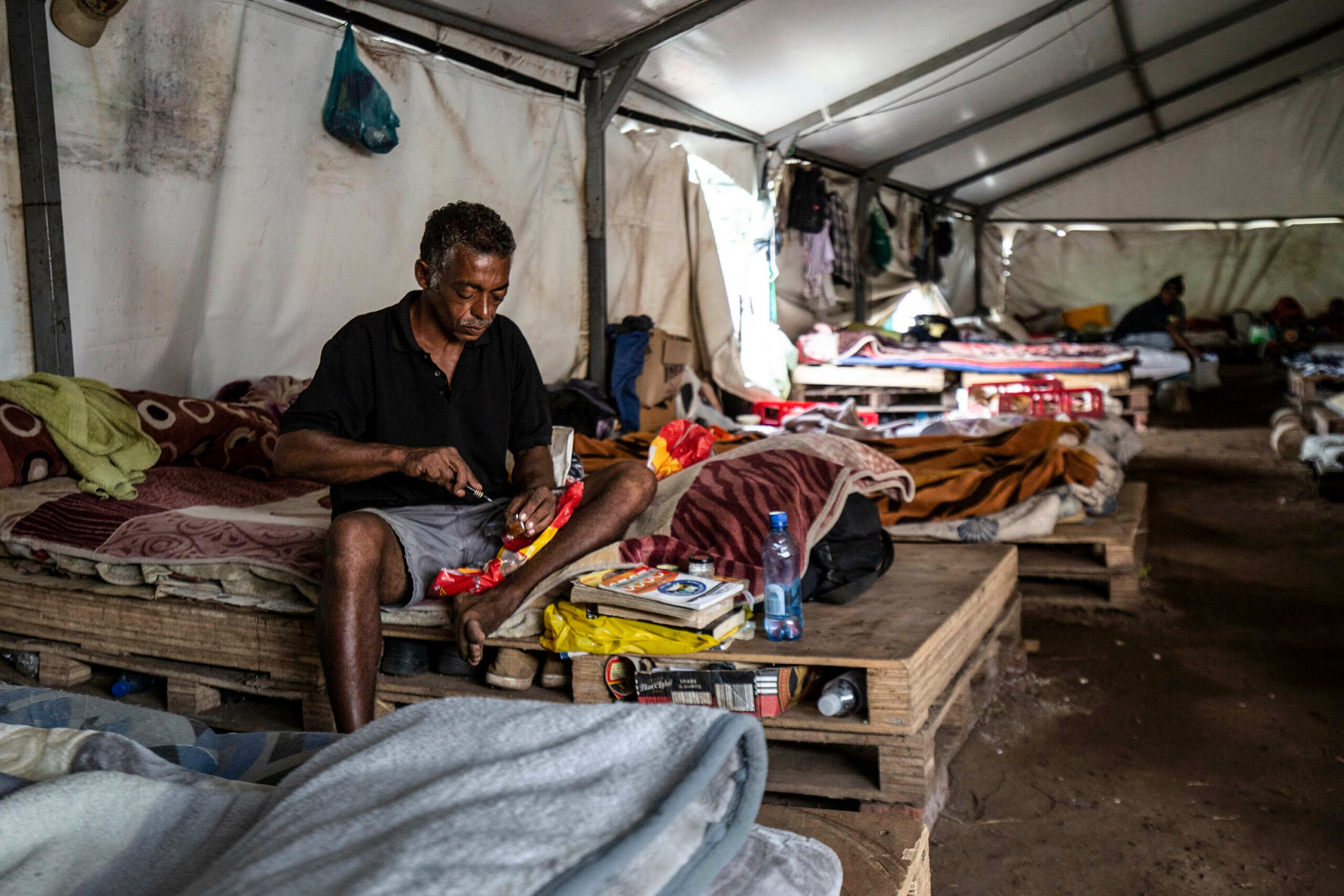 In a few days, Sandile Mthembu — a pioneering vegetable gardener at the Elangeni Green Zone — will have lived in the tented camp put up by the eThekwini municipality on a vacant municipal plot behind the Elangeni Hotel on Durban’s North Beach for an entire year.

Mthembu, 26, was among the first residents of the facility — one of 11 set up by the city to house the homeless when the level-five Covid-19 lockdown was first declared — and has lived there since, learning how to grow vegetables and sell them to feed himself and to make a living.

Mthembu was among the 20 residents who began a farming project in the camp to make money and keep occupied last April. Three months later, 10 of them were still involved in the project, which flourished, with spinach orders coming in from wholesaler Boxer.

However, disputes over money, and control of the project, resulted in five of its members leaving for Umbumbulu — along with money and equipment.

Mthembu and four others, including Peter Moyo, a former cotton farmer from Zimbabwe who ended up in Durban, decided to continue with the vegetable project and are still hard at work. They currently have a crop of spinach, tomatoes, spring onions, peppers and lettuce in the ground and have built a greenhouse in which they have germinated seedlings to plant in several beds they have prepared.

Mthembu, who comes from Cliffdale, halfway between Durban and Pietermaritzburg, said this week that he wants to continue growing and selling vegetables as long as the camp is in existence.

The city has cut the number of camps from 11 to four — the Elangeni site and three others, one in Albert Park and another in Block AK for men, and the Strollers facility for women — as the country moved into level one.  Initially, more than 2 500 people were housed and fed by the city. The number of residents dropped to about 1 800 in June when the country moved to level three and now stands at just under 560.

Together with NGOs and the health department, the city is also running a permanent harm reduction centre in Block AK. The city’s methadone programme began at the beginning of lockdown to treat heroin addicts on the street who wanted help in a camp set up in the Moses Mabhida stadium parking lot. Thus far, 300 people have received treatment through the programme.

About 250 homeless people who entered the camps last March have been reunited with their families after social-work intervention. Another 550 went back to their families at the end of the level five lockdown, according to statistics provided by the eThekwini municipality.

When the lockdown was declared, Mthembu had been living on the beachfront, surviving through what he calls “aqua art” — making and selling sand sculptures contained in glass bottles he had picked up on the street and washed.

“When I first came here, I was thinking maybe 21 days or a couple of months. I never thought I would still be living here now,  a whole year later,” Mthembu said last week.

“I’ve learned a lot here. I’ve gained so much knowledge, not just about farming. I’ve learned that if you listen to other people and work with them, you can achieve something,” he said.

“Before Covid, if you were on the street, you were on your own. Nobody cared. There was no help from anywhere. I’ve learned that people will help you if they can see that you are trying, that you are willing to do something,” he said.

“The municipality is still looking after us, after a year, giving us a chance to do something.”

Mthembu hopes that the project will succeed and that he, Moyo and the others can continue to make a living.  A plan to start planting on the second piece of land in South Beach has been delayed by the owner’s death from Covid-19. Still, he hopes that with the productive capacity of the second plot, they can start setting up tables in the streets to sell their produce, in addition to supplying local restaurants.

“We can make this thing work: set up tables and then employ other guys from here so they can make something. We can even take the same skills and teach people in the community. At home, I’ve told them we need to start clearing bush, so we can plant and sell to people,” Mthembu said.

Moyo left Zimbabwe for Mozambique in 2008.  The country’s economic collapse meant his cotton crop — and entire year’s work — earned him R420. Life wasn’t any better working in Beira’s docks, so he moved southwards, ending up in Manguzi.

Fortune landed Moyo a job with a catering company — he served former president Jacob Zuma dinner several times during the 2009 election campaign and even ate with him once. However, misfortune saw him end up in North Beach when the Covid-19 lockdown was declared.

Moyo quickly put the skills he developed in Zimbabwe to use and has become the centre of the farming group’s knowledge base.

Like Mthembu, he is keen to continue with the project. Like most of the men left in the camp, he doesn’t have anywhere else to go.

“When I left Zimbabwe, I did not think I would find myself in this situation, farming again,”’ Moyo said.

The municipality has committed to providing the scaled-down accommodation until the Covid-19 state of disaster is lifted.

Thereafter, Block AK and Albert Park will be permanently repurposed by the city as “safe sleeping spaces”, the name by which the facilities are now known.

However, it is not clear for how long they will continue to provide a lifeline to the residents of Elangeni Green Zone.

City spokesperson Msawakhe Mayisela said that the city, which had spent R80-million on housing the homeless since last March, would continue to run the facilities “until Covid-19 is no longer declared a disaster”.

Thereafter, the city would continue to province the safe sleeping spaces at Block AK and Albert Park and the Strollers facility.

“The homeless programme is one of the strategic interventions that the city has adopted to implement going forward, this was approved through a council resolution. The identified facilities [Strollers, Block AK and Albert Park] will remain as safe sleeping spaces to provide sheltered accommodation to the homeless who are currently in these shelters and those who are on the streets,” he said.

Previous PostEditorial: Whistleblowers need our protectionNext PostCrypto and blockchain: it’s time to put the phenomenon vs fad debate to bed