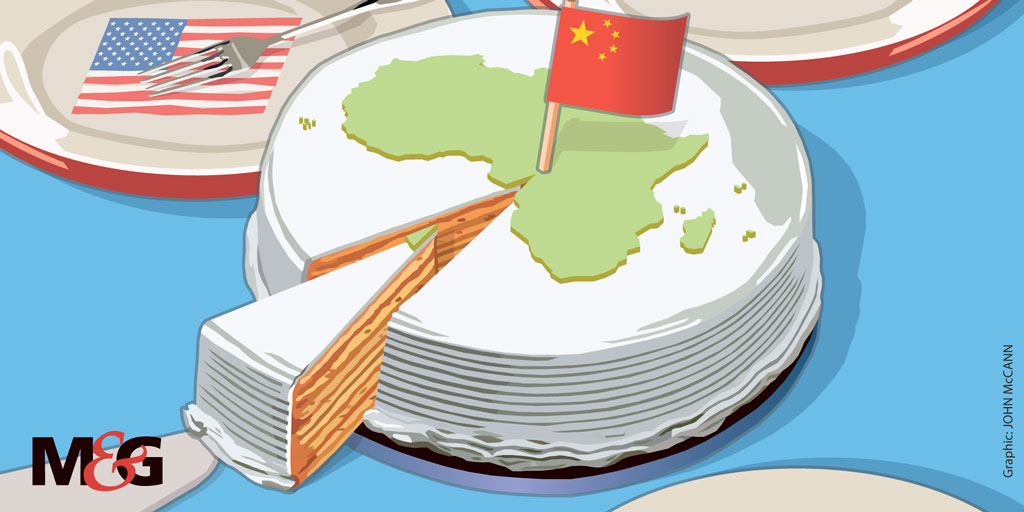 As Republicans and Democrats in the United States attempt to outdo each other on who is tougher on China, it is becoming clear that Africa will be drawn into this contest. Africa has already been positioned as a space in which China has to be “countered”. Western criticism of China’s presence in Africa is now standard. In public statements, the supposedly negative effects of China’s loans to African countries are presented as fact.

For its part, China will continue to look to Africa’s vote-rich 55-country bloc for support of its actions and international legitimacy. The West too will lean on its African partners — leveraging development aid and access to its markets as a carrot-and-stick approach to enforcing compliance. There will be talk of China’s divergence from “shared values” and a need to protect the international system. The discourse usually implies a certain illegitimacy to the presence of non-Western actors in Africa. In this narrative China and, to a large extent, Russia are projected as invariably malign in intent as opposed to the putatively benign objectives of Western actors.

But this has hardly been Africa’s historical experience. Although the West has predominantly perceived and engaged Africa through development lenses, with a relatively recent and welcome focus on human rights, there has been an active European presence on the continent for centuries. Free of any peer competitor or challenger, Europe has enjoyed unencumbered access to Africa for labour, mineral endowment and agricultural products at a steep discount.

Even at the formal end of colonialism, Europe and the West continued to extract from Africa through transfer pricing and one-sided, extraction-heavy, mineral-development agreements.

One report showed that “101 companies listed on the London Stock Exchange — most of them British — have mining operations in 37 sub-Saharan African countries” and “they collectively control over $1-trillion worth of Africa’s most valuable resources”.

It is, thus, frustrating that in its complicated, enmeshed, centuries-long history in Africa, there has never been a Western proposal for continental-scale infrastructure building. Outside Cecil John Rhodes’s racist “civilising” project of connecting Cape to Cairo from the 1870s, there has never been any programme, backed by financial resources, to build Africa’s rail, roads, ports, water-filtration plants, or power stations. It was the Chinese who sought to build a road, rail and maritime infrastructure network to link Africa’s economies with the rest of the world.

The Western argument of Chinese debt-trap diplomacy, inferior loan terms and an insidious, covert campaign to seize African national infrastructure assets rings hollow in the absence of a like-for-like Western alternative. Until the arrival of the Chinese, the infrastructure construction space in Africa was dominated by Europeans.

Per Berlin-based European International Contractors, Chinese companies accounted for 62% of the market share of infrastructure construction on the continent in 2018. There is a reason for that. The arrival of Chinese firms with competitive value for dollar cost has cut into the market share of European construction companies to the benefit of African publics. Yet, in the coming months and years, Africans will be expected to pick a side. It’s unclear why we would.

But there are also significant constraints to the China-Africa partnership. There are hard limits to the applicability of the Chinese “model” in Africa. First, no country in Africa can match the size of the Chinese market. Sixteen of Africa’s 55 countries are landlocked and 22 have a total population of five-million or less. China’s political model of a single party controlling the military, government bureaucracy and business, and the absence of an independent civil society will have limited efficacy in Africa.

Second, about 90% of China’s population is Han Chinese, but most African countries south of the Sahara are an amalgam of myriad ethnic groups for whom leadership in society is a negotiation of grand bargains and coalitions among either regions or ethnic groups.

And, although China has no racist colonial past in Africa, the experience of Africans in Guangzhou during the Covid-19 outbreak there does not bode well for our long-term relationship. China now hosts the largest number of Africans studying outside the continent, but has not created legal means for any of those Africans to make their home in China.

Meanwhile, about one million Chinese now live on the continent, engaging in trade and commerce freely. Africa’s relative weakness vis-à-vis its partners ensures that areas of the engagement will deliver sub-optimal outcomes for Africans. It is, thus, important that, in the market for partners, Africa retains its options and eschews selecting one “preferred” partner over the other.

In the past eight months, Western countries have spent more than $5- trillion to prop up their economies in response to the Covid-19 pandemic. JP Morgan projects that over 14 years (2013 to 2027), China’s Belt and Road Initiative (BRI) will cost about $1.2-trillion to $1.3-trillion. That kind of gap (both in dollars and time) makes it clear that, if it wanted to, the West could equal or surpass China’s BRI with its own infrastructure programme. If Africa steps away from China’s infrastructure programme, which Western country is ready and willing to fill the gap?

There is a true cost to African antagonism of China — a cost the West is evidently unwilling to underwrite. For example, is the US prepared to underwrite the total cost of replacing Huawei equipment across the continent? Because turning down Huawei equipment will lead to a derailment of Africa’s digital future. And for Africans there is an even greater cost to “join China” against the West — a cost China would be unable to cover.

Ultimately, both China and the West benefit from a global system that confines Africa’s role to being a source of unprocessed natural resources and a market for finished products. Africans know that Africa has much more potential. The continent is best served by charting its own course and sitting out the coming Cold War, taking over the driver’s seat of its development future and determining which partners will bring the most value.

W Gyude Moore is a senior policy fellow at the Center for Global Development, and a former minister of public works in Liberia