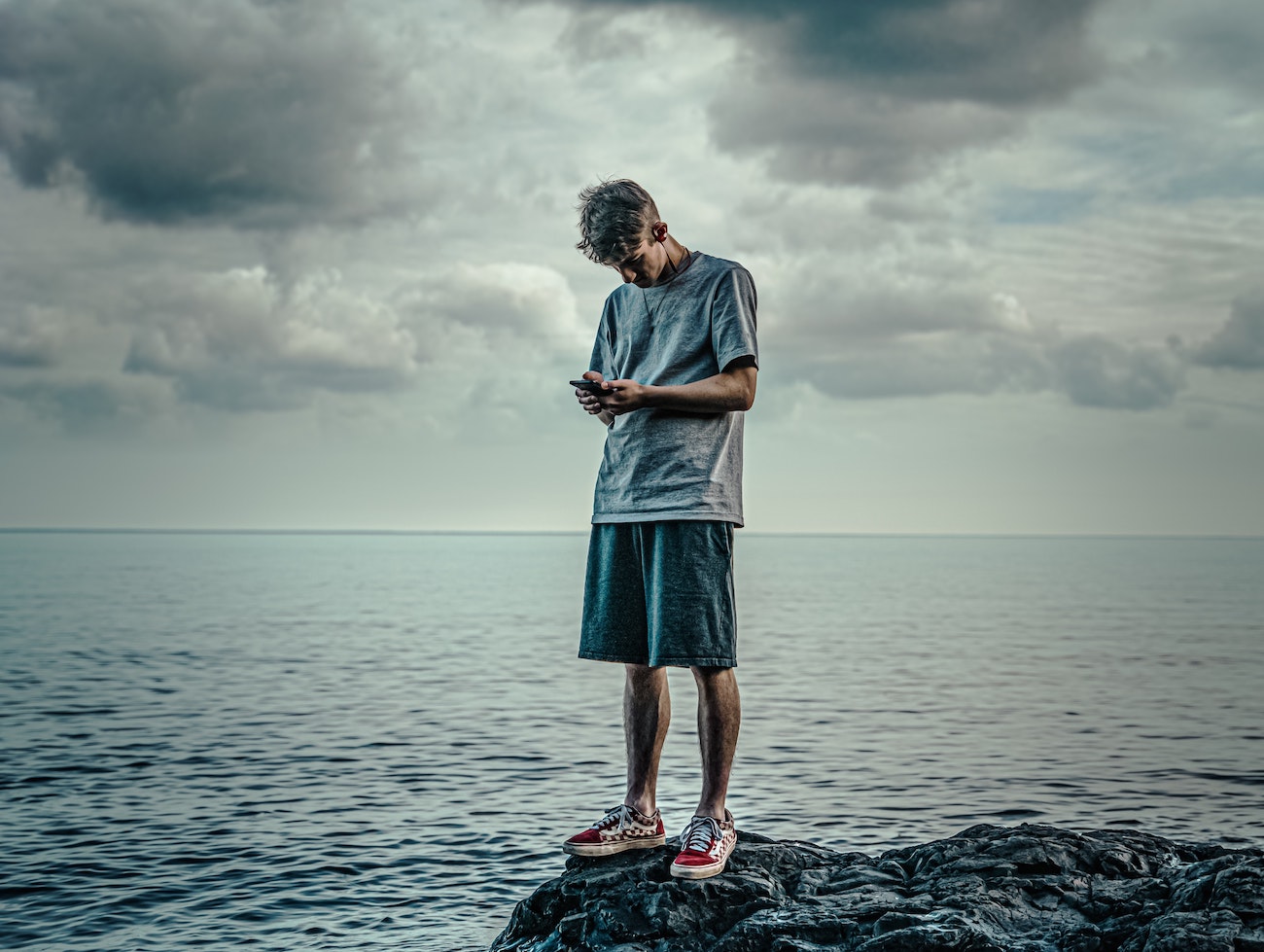 This is not a guide of how to trade crypto. This is not about how to make money, how to invest, or where to find alpha.

But if you’ve dabbled in crypto-trading? Then you know this one thing: It can be all-consuming. When your money is on the line, suddenly you’re checking the prices more than you check social media, you obsess about the charts, and even your dreams are filled with candlesticks and Elliot Waves.

Oh, and there’s never a break. Stock day-traders might be Red Bull-pounding stress-monsters from 9:30am to 4pm on Monday to Friday, but they are then forced to relax when the market closes. Crypto is always on. Trades beckon. If you’re asleep at 2am? Maybe you just missed a 10X opportunity. Spent Sunday morning at brunch? Maybe you failed to avoid a -40% bloodbath. So it’s easy to stare at the screens – and stare and stare and stare.

“The casino never closes,” says Scott Melker, a trader who goes by the alias The Wolf of All Streets (and one of The Men Who Stare at Charts). “It’s just very, very difficult to detach. It’s a forced skill.”

So how do you cultivate that skill? More broadly, how do you protect your mental health while investing or trading in cryptocurrency? We spoke with Kevin Zhou, head trader of Galois Capital; Bobby Cho, partner at CMS Holdings, and Melker to get some insight on best practices.

Each trader stressed – repeatedly – that this is not financial advice. Instead these are tips, strategies, and guidance for how to stay sane.

Sure, the exchanges are open 24/7, but that doesn’t mean you need to be. “I treat it like a business,” says Melker, who only trades between 9am and 5pm, and then he has dinner, puts his kids to bed, and lives like a normal person.

Each trader emphasized mental discipline. “Do your homework in terms of why you found a trade interesting, and what you intend to do with it,” says Cho. “I tend to take a lot of notes, like ‘What’s the risk/reward profile of what I’m doing? What am I willing to make on the trade, and what can I stand to lose?’” Cho says that once you’ve “capped” your potential losses and gains, then you’re less likely to impulsively act on emotion.

Melker agrees, noting that “A lot of people stare at the charts, willing it [the price] to go up or down.” He doesn’t do this. Instead, Melker plans his trades in advance, creates his entry and exit points, and then he ignores the chart, as it’s “in the hands of the Trading Gods.” He steps away and goes about his life. “The biggest mistake people make is emotionally changing their plan, mid-trade,” says Melker. “Moving your stop-loss down because you think it’s about to bounce 100X right after you got stopped-out.”

Zhou says the biggest problems in trading are hubris, fear and greed. Keep the emotions neutral. Focus on the methodology, the framework of the trade, the cold logic of the percentages. “You shouldn’t feel too good about the wins that you have, and you shouldn’t feel too bad about the losses,” says Zhou. But okay, real talk? That’s easier said than done. How do you cope with the losses? (Because there will be losses.)

4. Treat losses as an opportunity to learn.

Every loss, says Zhou, can teach you something about trading. Reframe the loss. Don’t let it be a trigger for anger, despair, or self-flagellation. Let it be a trigger for learning. “Just analyze the situation,” says Zhou. “The first question is, did you take that loss because you came in with a positive edge – more than 50% – and then you got unlucky? And don’t lie to yourself.” If you simply got unlucky, well then just roll with it, as that happens and you need to focus on the long-term.

The second question Zhou says you should ask: “If that’s not the case, if you actually made the wrong decision, then try to figure out what led you to that wrong decision. Was the logic unsound? Or was the logic sound, but your assumptions unsound?” Cold analysis can temper hot anxiety.

Obvious? Maybe. But also overlooked. “It’s essential that you go to the gym, or exercise somehow, to clear your head,” says Melker.

Especially in the early days of crypto-trading, it’s natural to obsess about the prices, positions, and possibilities throughout the day no matter what you’re doing – in the shower, on a date, even playing with your kids. Cho checks this impulse by compartmentalizing his different activities in life, and then lasering his attention on whatever he’s doing. “On Saturday morning, my kids are going to wake up around 7:30 or 8, and I’m going to spend the morning with them,” he says, and in that time he doesn’t check the charts or think about crypto. His priority is the kids.

Conversely, on Monday morning when he’s in trading-mode, that gets his full attention. “If you don’t have these priorities,” says Cho, “then your focus is all over the place, and you’re half-assing everything.”

7. Don’t put too much financial pressure on trading.

The trades become harder to stomach when your livelihood depends on the outcome. It’s harder to think rationally. It’s easy to get swallowed up by anxiety, which might nudge you to chase losses or gains. “Take the pressure off with multiple income streams,” says Melker. “It’s helpful if you don’t need to make $1,000 a day trading.”

8. Strip away the emotions.

This one’s critical enough to warrant a bit of repetition. “It’s extremely important to have emotional control while you’re trading,” says Zhou – important for both mental sanity and financial performance. The best way to develop that emotional control? Practice. Repetition. Time on task.

See also: Ben Munster – The Men Who Stare at Charts

“When you start out trading, it’s very normal that when things go well, you feel like a genius, like you’re on top of the world. And when things go badly, you feel like an idiot, and you get depressed,” says Zhou. Then you keep trading. You keep learning. “Over time, as you do it more and more, you get used to it, and it doesn’t affect your day-to-day. It’s really important to get to that point, because you definitely don’t want emotions affecting you.”

Cho frequently steps away from the phone, laptop, charts, crypto Twitter. He says this is necessary for balance and sanity. “Ultimately there’s a whole world outside of crypto,” says Cho, and then laughs a bit. “Although some would say there isn’t.”

In casinos they say the house always wins, because over the long haul, once you tune out the noise of flukey players who do well at blackjack, the house enjoys the percentage edge. If you have a 52% chance of winning, you will rack up many Ls, and maybe you might even lose three or five or ten times in a row….but when the sample size gets to be 10,000, you will win around 52% of the time. Melker says that if you’re trading with the right mindset, that’s how you view each trade…and let the losses roll off you. “It’s almost like this long-term mathematical formula,” says Melker. “If you execute, and you do it long enough, you just win a little more than you lose.” Melker says that at this point, individual losses “don’t affect me at all.”

Or as Melker puts it, Get a life.  This helps keep balance and can curb the obsession. “I have two children, and I have a wife,” he says. “It’s important to me not to be an absentee father, or a slave to my iPhone.” Along those lines…

“Time management is a key feature in everything I do,” says Cho.  “In any given hour I ask, what is my priority? And understanding that list of priorities is very important.” If his priority for the hour is to research Company X, then he will focus on that, and only that, and he won’t obsess about crypto prices. Conversely, if the focus of the hour is to trade, then that commands his attention and he won’t worry about Company X. “Obviously you’re not agnostic about what’s happening in the market,” says Cho, “but establishing priorities helps.”

Crypto trading and investing, for many, is more than just price action: It’s also about understanding the tech, the philosophy, and the constant changes to this fascinating new world. That can be a lot to keep up with. Instead of getting distracted by every tweet and every crypto article – which can add anxiety, fuel ADD, and take you away from your current area of focus – Cho simply dumps new content in what is essentially a “to read later” bucket, and then catches up when he’s ready to focus on that and only that.

See also: How Bitcoiners Can Protect Their Mental Health During the Coronavirus Crisis (podcast)

In the old universe where people went out to restaurants for dinner, pre-COVID, Melker and his wife had a deal: “If we were out, I would leave my phone in the car,” he says. “When the phone’s in the car, I’m not going to think about it.”

Alternatively, in a dissenting opinion, here’s a different perspective entirely:

Contrarian Take: Accept that there is no such thing as work/life balance.

“I’m a little contrarian here,” Zhou says, acknowledging that this cuts against the grain of the Maintain Balance ethos. “For people who really want to get good at something, there’s no such thing as workplace balance.” He adds, “Sometimes you lose sleep. Sometimes you lose friends.” Zhou admits that this can take a toll, and maybe it means that your social life takes a hit. “But there’s a lot of opportunity here,” he says. “We can rest while we’re dead.”

15. Know that crypto obsession will never truly go away.

Even the most seasoned, well-balanced traders say that, at times, they can still surrender to compulsive price-checking impulse. “It still remains a challenge at times,” says Melker. “You can’t predict when bitcoin is going to strap you into the roller-coaster.”

And finally, a bonus consideration:

Value your time over money

This is less a specific hack and more of a general principle. In essence, the concept is this: Don’t forget what really matters. “The most valuable lesson you learn is that the point of your money is to buy free time,” says Melker. “It’s not so you can spend more time trying to make money. Trading should be one of those rare opportunities where, if you’re successful, you’re not slaving away to make someone else wealthy.”

In other words, if you’re spending 24/7 staring at crypto charts, and never doing anything else with your life… have you really beaten the system? Have you really won the game? “If your money is not buying you more time,” says Melker, “You’re doing it wrong.”